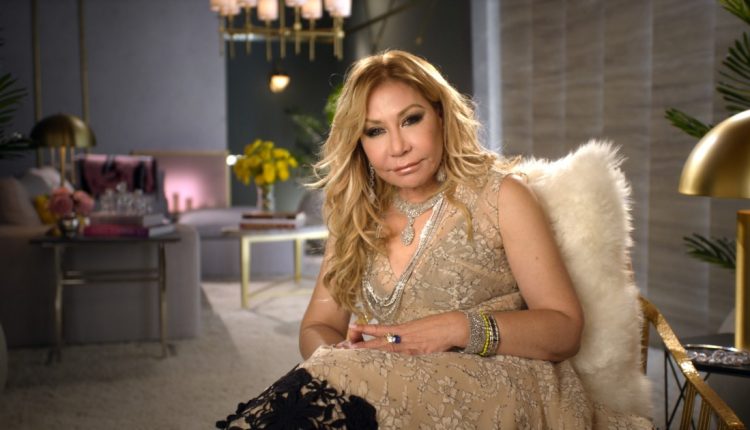 Netflix’s “Bling Empire,” a reality series centering on some of Los Angeles’ crazy rich Asians, transports voyeuristic viewers to a sprawling Sunset Boulevard estate with a paddle tennis court, a swimming pool and a koi pond. Allegedly, the acre-plus property was once owned by mobster Tony Milano and home to Shirley Temple.

One episode sees a rack of the latest Dior merchandise wheeled over the foyer’s mosaic tiles for some light shopping: a cashmere sweater, a silk shirt, a pair of high-top sneakers — the latter priced at $1,100. It’s all too much for Kevin Kreider, a model and the cast’s resident Everyman; he later skateboards back to the Spanish Revival mansion in an attempt to return the gifts.

But Anna Shay, the notoriously private daughter of late industrialist Edward Shay — whose billion-dollar company Pacific Architects and Engineers, which the family sold to Lockheed Martin in 2006, specialized in contracts with the likes of the U.S. government and the United Nations — reassures him that there are no strings, or sponsorships, attached.

It may be a cliché but Shay actually means it. She is eye-poppingly generous with her friends — her birthday presents range from elaborate parties and tennis bracelets to Parisian getaways and shopping sprees — but she genuinely appears not to have an ulterior motive to her spending. Even when the purchases are for herself, she sees fine jewelry and designer clothing not as signposts of opulence to publicize on Instagram but as whimsical wearables that simply bring her joy. Bragging about luxury brands, whether in person or on social media, are big no-nos for Shay.

“I think the ones who talk about it don’t really have it,” she tells The Times in her soft-spoken yet animated way. “Why would you wear something to show it off? My mother came from aristocracy, and my dad came from the South Side of Chicago. They told me that if they ever saw the clothes wearing me or the cars driving me, they would take it all away and never buy anything for me ever again. I’m glad they did that.”

Of course, it’s a luxury to be so gracious when it comes to money. But in today’s reality TV landscape, where stardom is most frequently pursued to promote a personal brand or business, it’s rare for cameras to capture someone so unabashedly delightful about their wealth.

“To me, she’s like a real-life Asian-American Auntie Mame — someone who has all the resources in the world but has nothing to prove,” says “Bling Empire” executive producer Jeff Jenkins, who convinced his friend of more than a decade to be part of the series. “She was like, ‘No one’s gonna want to watch me, no one’s gonna be interested in me. I’ll wreck your show!’ But she really is special.”

Shay’s munificence is not just a contrived storyline for the screen. Whenever scenes were filmed at her estate, “Off-camera, she’d be bringing platters of filet mignon to the crew,” Jenkins recalled. “Many times, they couldn’t get out of there without a five-course meal.”

“It’s very simple. They work so hard, they’re moving around with all this equipment, and if it wasn’t for the crew, there’d be no show,” says Shay, who also shared some of the “pounds and pounds of caviar” she had on hand for a dinner party. “A lot of them didn’t know what caviar was, which is odd, and they kind of hesitated. They seemed to like it though.”

Shay, who is of Japanese and Russian descent and has been married four times, stands out because she’s in her late 50s, so she’s some years older than the rest of the “Bling Empire” cast. But she’s also the show’s most guileless personality, with an unmatched buoyancy and knack for living in the moment.

“I never grew up,” she admits. “My son always tells me, ‘Mom, you need to grow up a little bit, you’re my mother!’ I said, ‘That’s OK, I’m still your mother, tomorrow and every day.’ But I’m really trying. I feel like I should be a little more responsible. Maybe.”

Premiering Friday, the first eight episodes, filmed over three months in early 2019, find Shay advising entrepreneur Kelly Mi Li on her dating life, scolding DJ Kim Lee on her manners and feuding (well, “feuding”) with fellow socialite Christine Chiu. (Warning: Though Shay assumes the best of people, some mistake her kindness for weakness, and she’s an expert in social warfare when needed.)

Mostly, though, Shay’s scenes luxuriate in her natural state of being rich and unbothered, as she scans the glass cases of jewelry like a kid in a candy store and gleefully rides a hoverboard on Rodeo Drive with Florent Bonadei, a Boucheron client executive who has become a close friend.

Even the onscreen discovery of a penis pump on her property doesn’t faze her: “For the record, that was in the guest bathroom, not mine,” she says with a laugh. “If I were producing this show, there’s no way I wouldn’t have used that. So there’s no way I could ask, ‘Please take it out.’ That would be very selfish.”

During the COVID-19 pandemic, Shay has kept busy overseeing philanthropic efforts, planning the remodeling of her new home — her Sunset Boulevard estate is on the market for $16 million — and getting accustomed to Boucheron’s online shopping platform. She’s in a group chat with the “Bling Empire” cast but usually stays silent; at the urging of the series’ producers, she made her Instagram profile public, though begrudgingly.

“Oh my God, my nightmare,” she says of the social media platform. “I was so pleased with it when I had 10 followers who were actually my friends. Now I have a couple hundred that I don’t know. I don’t see why anybody would want to see pictures and pictures and pictures of me. There are better things in this world.”

But with one season down, Shay says she’s open to filming more reality TV. “We can have a big party here,” she says excitedly. “No sponsors.”

How sea shanty TikTok and ‘Wellerman’ took over the internet

Ariel Pink complains to Tucker Carlson: “People are so mean”