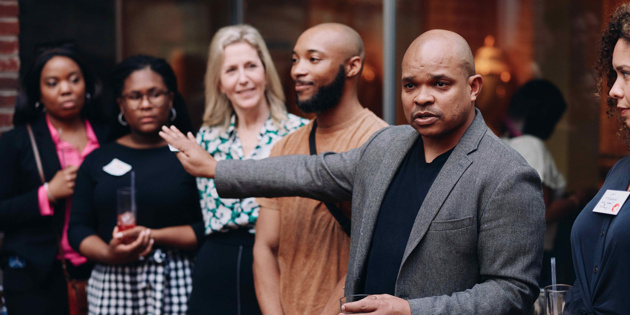 Producer Warren Adams addresses the JGO Fellows at a reception.
(Photos by Emilio Madrid for Broadway.com)

“My co-founders Warren Adams, Reggie Van Lee and I are truly excited about what this partnership with Broadway Across America/John Gore Organization has offered to this first cohort of young, Black professionals, by hosting them at regional BAA offices,” said T. Oliver Reid, BTC Co-Founder and Artistic Director in a statement. “What has started this year as six fellows, we look forward to doubling that next year in more offices. Lauren Reid and the BAA team jumped into this partnership feet first and have inspired us with their compassion and drive to bring this program to fruition. We look forward to a lasting partnership with BAA/JGO as we continue to remove the illusion of inclusion in the American Theatre.”

The BTC/BAA Fellowship is happy to announce the next class of fellows will be welcomed into BAA in January 2023. Applications for the upcoming spring cycle are now available.