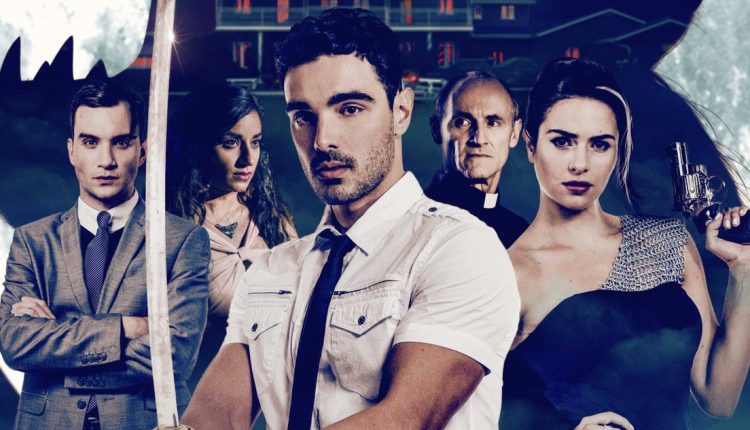 In the new horror movie, Beast Within, a murdered body is discovered at a Gaming App launch party, guests grow suspicious of each other as they become players of the deadly game. The whodunit creature feature stars Steven Morana (Whiskey Business) and Holly Deveaux (The Mist) as a couple attending the launch party of their gaming app Werewolves Awaken, but when a guest is mysteriously found dead, they question who could be the killer, as everyone becomes a suspect and player in a deadly real-life version of the game.

Morana who co-directed with Chris Green (Zombie Werewolves Attack) and co-produced with Nic Izzi (1BR) plays the timid tech genius turned action hero and his martial art background contributed to him doing all his own stunts during the confrontation with the werewolf.

We caught up with star and co-director Steven Morana to talk about his new entry in the werewolf film subgenre Beast Within.

Based on where some of you work was filmed, I’m thinking you’re a Canadian?

Your hunch was right. I am from Toronto, Canada.

And when did you decide to tackle the bright lights, big city of Hollywood?

When I got an agent as a young adult and was introduced to the professional side of the industry, the idea of moving to Hollywood came to mind. I was heavily influenced by the Toronto International Film Festival. I went to events and premieres that housed the introduction to many talented professionals working in Hollywood that I ended up collaborating with. Plus, I always wanted to live by the beach.

How long had you been wanting to not only act but make movies?

Acting is something I have been doing since I was a 7 and has been a lifelong passion for me.  The filmmaking process presented itself on this project and I felt confident to dive in because of the support of my fellow producers and co-director.

Was it always about being an all-round entertainer who can do everything?

I definitely don’t do everything I am only as good as the team I work with. I have had a lot of guidance and support through my filmmaking process. I love storytelling and acting has always been my base where other aspects of production evolved from.

What did you learn from seasoned pro Colm Feore?

He has a presence on camera.  He falls into a character so effortlessly and captivates. This was a treat to watch and play off of in our scenes.

And you’ve Holly Deveaux in here too?

Yes, she is very talented, hilarious and a true professional on set.

What kind of training did you have to do for the film – whether it be fight training or swordplay?

We had a great stunt coordinator, Simon Fon, that ensured my safety but supported me in doing all of my own stunts. I come from a martial art background so the fight choreography and breakfalls I did in the film came naturally to me.

I have to ask, since the film surrounds an “app”, have you worked in that area?

I had a close friend who works in that world and he was part of my inspiration in some of August’s characteristics. He also helped in consulting on some of the dialogue polishes as well.

And are we talking franchise, here?

Yes. There is a lot more to explore in where we can take August’s story. We are just getting started!

Beast Within is now available On Demand in the US and Canada with a UK release still yet to be announced. A Build Character production in association with Little Axe Productions and High Star Entertainment, Beast Within was released in North America on September 8th by Stonecutter Media. Executive Producers are Amy Williams (Rock, Paper, Scissors) Spero Stamboulis (Warning Shot), and Bruno Marino (Gridlocked).

‘Fit Beauty’ Sara Ali Khan Will Leave You Stunned With Her Aerial Yoga!