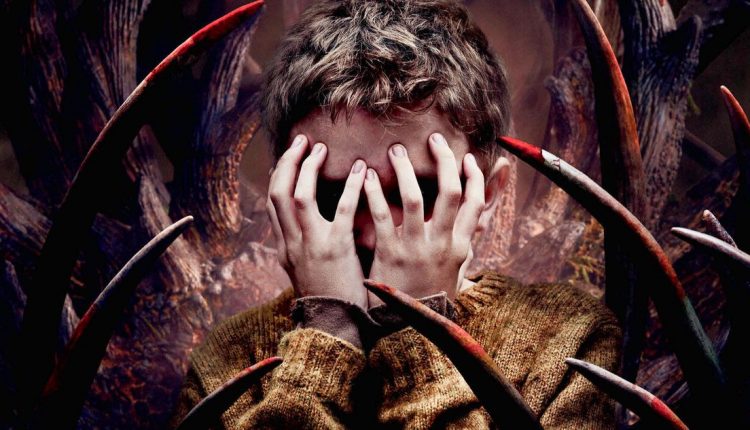 Antlers is a deeply atmospheric monster film that fails at the most important tenet of the horror genre. It’s not scary at all. Every fright is broadcast from a mile away. The characters behave irrationally in dangerous situations. There’s never a doubt about the outcome. It follows the standard tropes audiences have seen a million times before. The lack of realistic tension is tremendously disappointing. Especially when the cast, creature effects, and social commentary is so well done.

Antlers takes place in a remote Oregon town shrouded in mist, poverty, and meth production. Keri Russell stars as Julia Meadows, a teacher at the local elementary school haunted by alcoholism and an abusive upbringing. She’s come back to her childhood home to live with her brother. Paul (Jesse Plemons) is the town’s reluctant sheriff. He struggles with evicting poverty-stricken people with no place to go and zero options for employment outside of illegal drugs.

Julia becomes extremely concerned by the behavior and appearance of a bullied student. Lucas Weaver (Jeremy T. Thomas) is gaunt, dirty, and draws horrifying pictures in his sketchbook. His younger brother, Aiden (Sawyer Jones), was pulled from school by their father, Frank (Scott Haze), a known meth dealer. Meanwhile in the surrounding woods, an indigenous hunter (Graham Greene) finds a savagely mauled corpse with strange antler remnants by the body.

Director Scott Cooper (Crazy Heart, Hostiles) worked for years as a character actor. He knows how to get emotionally resonant performances from his cast. Young

Jeremy Thomas steals the show as a terrified boy dealing with a bloodthirsty predicament. His fear is palpable and realistically depicted. Cooper needed to keep the child’s point of view as the primary perspective. Keri Russell is an able lead with the material, but essentially portrays a tired stereotype. Antlers best moments involve every scene with the kid. The honesty and rawness of his primal reactions supplants the banality of a formulaic plot.

Antlers sells the existential misery of economic hopelessness. What it fails to do is trigger a jump, gasp, or diverted eye. The supporting characters abandon self-preservation and serve up their innards like a volunteer human buffet. Their illogical behavior makes zero sense and tries my patience utterly sitting through silly horror movies. Scott Cooper hasn’t made a dumb movie. But his efforts to deliver visceral scares are just not successful.

Antlers can be appreciated for its craft. But audiences aren’t walking into this film because of its exploration of a rural Oregon mining town’s financial woes. The entertainment value correlates directly to the scare factor. This is the expectation the film’s marketing sets up. Honestly, the recommendation gauge would lean towards positive if I flinched even one time. There are no surprises here. I wasn’t scared for a second of this film. Everything plays out exactly as expected down to the last shot. Antlers is a production of Phantom Four Films, DDY, and Mirada Studio. It will be released exclusively in theaters on October 29th from Searchlight Pictures.

What's on TV Monday: '4400' premiere and "All American" season premiere on The CW