Ashnikko has won the internet. Are the pop charts next? 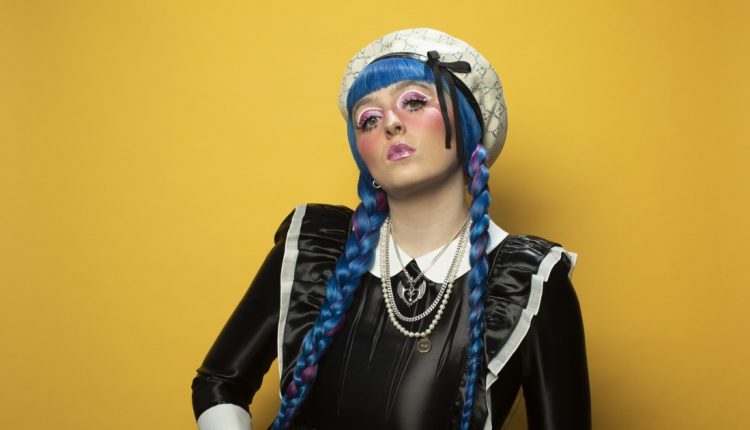 Boys, beware: There’s a new kind of pop star on the rise.

Foul-mouthed seraph Ashnikko first strikes viewers with her long blue pigtails and ethereal humanoid beauty. Sometimes, with the help of unsightly prosthetic horns, scars and noses, the 24-year-old singer and rapper will transmute herself into a bloodthirsty girl demon. In her new video for “Deal With It,” which samples Kelis’ 1999 punk-rap kiss-off, “Caught Out There,” Ashnikko plays a pirate wearing a hat with the word “FART” scrawled in red paint, before morphing into an animated sea monster, outfitted with CGI tentacles sprouting from her breasts, threatening to capsize the ship.

“I don’t need a man, I need a rabbit,” she spits as she steers towards the femme Kraken. “I need a new toy just to cleanse my palate.”

Zooming from inside an Airbnb in Hollywood, Ashnikko’s swapped her pirate gear for a heavy-metal T-shirt and pajama pants; her round blue eyes are framed by black-rimmed glasses. It’s two days before the release of her new Warner Records mixtape, “Demidevil,” and her phone keeps emitting a series of discreet jingles. “I’m up,” she groans, tossing it aside. Her mom texts her from North Carolina: Are you stressed? Ashnikko shakes her pigtails. “Well, I wasn’t stressed when I got up this morning, but I sure am now.”

By infusing a Harley Quinn brattitude into bubblegum trap songs about rape revenge, Ashnikko has built a devoted following almost exclusively via video platforms like YouTube and TikTok. Her 2019 breakthrough single, “Stupid,” featuring Yung Baby Tate, became a viral dance challenge on TikTok, earning more than 3 million views and a nod from Miley Cyrus. “Daisy,” from “Demidevil,” fared even better: After TikTok users were invited to partake in a “BeatsDaisyChallenge,” sponsored by Apple’s audio brand Beats, the single amassed more than 10 billion views. “I’m not a princess I’m a king / Bow down and kiss on the ring,” she sings — a braggadocious verse tailor-made for virality.

It’s a far cry from her past as Ashton Nicole Casey, the lone American girl at her high school in Riga, Latvia. Her father, a scholar of the Baltic states, relocated the family from Greensboro to pursue his studies. In lieu of making friends, much less learning Latvian, 14-year-old Ashton spent her teen years writing poetry and photosynthesizing in the glow of her computer screen, absorbing Sailor Moon gifs and selfies of tattooed punk girls soaking in bathtubs and engaging in gender discourse on what she now calls “the best website on the internet: Tumblr-dot-com.”

“I didn’t have much of a home base,” she says. “I was basically raised by the internet.”

Ashnikko derived a sense of cultural identity from the virtual island she shared with other girls at odds with their physical environs. It’s the same online community that has produced provocative, cyber-pop trailblazers like Grammy nominee Doja Cat, who stars opposite Ashnikko in 2019’s “Boss Bitch” — or further left field, Canadian singer-producer Grimes and New York rapper Princess Nokia, who both collaborate with Ashnikko on “Demidevil” cuts “Cry” and “Slumber Party.” Tumblr’s function as a multimedia mood board eventually sparked a similarly chimeric genre of pop, designed by and for internet natives.

“I only used to listen to women — Lil’ Kim, Björk, M.I.A,” she says. “I’d get in trouble for writing like, Dr. Seuss rhymes about boobs in class. But women on Tumblr really inspired me. I wanted to feel creatively powerful like that — not in a weird, power-hungry way, but in a goddess type of way.”

“Demidevil” is a kitchen sink of early 2000s pop nostalgia, bleeding-heart emo rap and bullet points from Valerie Solanas’ 1967 misandry treatise, “SCUM Manifesto,” set to whistling Nintendo melodies. “I’m, like, half-human, half-devil,” Ashnikko says of the concept. “We’re all a little bit of both… there’s the crime fighter crushing the patriarchy, the businesswoman, the girl who blows her rent money on pills. You just can’t be [just one of] these characters all the time.”

“Ashnikko’s certainly not a typical pop star, yet there’s something about her that’s both relatable and inspiring to her fans,” says Tom Corson, co-chairman and chief operating officer of Warner Records. “She’s a powerful force. You can’t help but want to be a part of her world.”

Ashnikko’s empowered verses offer comfort and catharsis for young women who’ve learned that their safety and pleasure aren’t valued. But cultivating that stance didn’t come easy; at age 18, she decided to kick off her rap career in London, which mostly meant couch-surfing among strangers’ apartments and writing songs on receipts while waitressing.

After releasing her “Sass Pancakes” and “Unlikeable” EPs to modest fanfare, Ashnikko eventually found a kinship in English producers Slinger and Oscar Scheller, and her own distinct voice followed. “We listen to Dolly Parton and Lil’ Kim and figure out how those two could meet sonically,” says Scheller. “It has to feel fun, but raw. And as punk and harsh as she can be, there is also a real sense of vulnerability and honesty that forms a perfectly imperfect picture.”

“I had to grow into my sound, which also came with becoming a woman,” she says. As an adult, she finally reckoned with the purity culture that dictated her girlhood in the Bible Belt and Eastern Europe. In the “Demidevil” closer “Clitoris! The Musical,” Ashnikko rolls out a show tune aimed at men, their fumbling hands and America’s lack of comprehensive sex education. In “L8r Boi,” a snarky inverse of Avril Lavigne’s pop-punk classic “Sk8er Boi,” Ashnikko urges the male subject to seek therapy; and in “Slumber Party,” which recalls the feverish pace of Britney Spears’ racy “Slave 4 U,” Ashnikko and Princess Nokia share bawdy fantasies of seducing girls at sleepovers.

“My worst heartbreak ever was from [liking] my best friend… and people told me it was just misplaced love,” sighs Ashnikko. (She came out as bisexual in 2019.) “In ‘Slumber Party,’ I’m poking fun at it. I was worried that people would think I came from the ‘I Kissed a Girl’ lane, but I know how I am… and I don’t feel like I need to prove my sexuality to strangers.

“Humor is my coping mechanism. It’s not that I’m a parody artist. I just can’t be serious. I can’t go that singer-songwriter route without like, throwing up. We are so small in the universe, and life is a lot more bearable with a sense of childlike wonder and playfulness.”