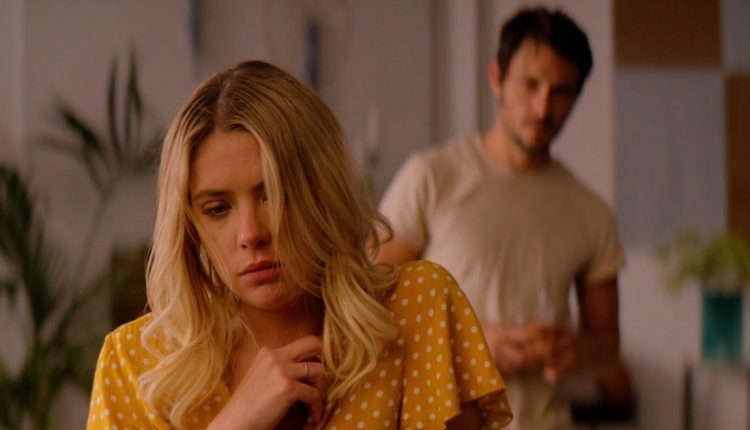 There is a lesser-known gem from 1960 titled Private Property, written and directed by Leslie Stevens (The Outer Limits, TV’s The Invisible Man) and starring Kate Manx (Perry Mason, Hero’s Island), Corey Allen (Star Trek: The Next Generation, Dallas), and Warren Oates (Blue Thunder, Stripes). Upon its initial release, the film was not favored by many critics and, due to its more mature content, was condemned by an influential religious group.

Although distributor Citation Films picked up the film in 1960, the company went out of business, and the film was considered “lost” for decades. However, Private Property was destined to be seen, as distributor Cinelicious restored and re-released the film for the masses in 2016. Perhaps it can be considered ahead of its time, as the film has found critical acclaim and fans within a modern audience.

After seeing the restored version of Private Property in New York, filmmaker Chadd Harbold (How to Be a Man, Long Nights Short Mornings) became one such fan and was determined to put his own stamp on the movie. He immediately roped in Shiloh Fernandez (Evil Dead, The Birthday Cake) as the film’s male lead, Duke, originally played by Corey Allen. Harbold and Fernandez were convinced that Ashley Benson (Pretty Little Liars, The Birthday Cake) was perfect for the female lead, Kathryn, originally named Ann and played by Kate Manx. The film’s cast is rounded out with Logan Miller as Oates, Frank Whaley as Ed Hogate, and Jay Pharoah as Kathryn’s husband.

As the film arrives in theaters, On Demand, and digital via Lionsgate, we talked with co-stars Ashley Benson and Shiloh Fernandez about how the film came about and what makes this one so “special.”

A Love Letter to the Original Private Property

MovieWeb: It’s great to talk with you both about your new film, Private Property. Shiloh, I have to say that I have been a fan of your work since Deadgirl in 2008. It is definitely an underrated horror gem.

Shiloh Fernandez: Oh, my god, that’s one of my favorite movies that I’ve made. I reunited with Trent Haaga, the writer. We’re adapting a book together now.

MovieWeb: Oh, wow, that’s great to hear! With your new film, there are some excellent twists and turns along the way that I think audiences will dig, especially if they haven’t seen the original because this is a remake. And speaking of the 1960 version, did you both see the original film before going into this one? Or did you decide to hold off?

Ashley Benson: Yeah, Chadd [Harbold, the director] sent me the original, and I watched it. Not necessarily to take anything from that and into this movie, because it is different. He took his own spin on it. But I just wanted to be familiar with the original because it’s one of Chadd’s favorite films. I really enjoyed it but took what I saw and then took Chadd’s vision into this. I didn’t really bring anything with me that I watched from the original.

Shiloh Fernandez: In China, we did a movie called Long Nights Short Mornings years ago. There was a war notes retrospective at the Lincoln Center in New York he went to and saw this movie that was a lost film for 50 years and was restored. When he got out of it, he called me and made me watch the film. It was a few years of going back and forth with the script and sort of figuring out how to modernize it.

I thought the original being linear and his film being ambitiously cut into sort of two halves in a way was obviously his own twist and something I was really scared of. I’m just like, how do you hold an audience for that whole time and with that switch? But I think Ashley’s so great in the movie that we got away with it.

MovieWeb: It did seem like a love letter to the original with a lot of the same shots and dialogue. Perhaps it will push people to check out the original?

Shiloh Fernandez: Yeah, absolutely. Chadd and our cinematographer would always talk about it. If there was a shot in the original that they couldn’t beat, then they had to use it or give homage to it. It wasn’t just that movie but in the way that Scorsese did Cape Fear. He took inspiration from all the movies that were made around that time. Chadd actually had me watch these other films that were made around the same time, and those were also inspirations for him, which was cool.

MovieWeb: Absolutely. Ashley, what drew you into playing Kathryn?

Ashley Benson: Shiloh had told me about the script, and, at the time, it was our third movie that we were going to do together. I’d known Chadd, and I know that he’s just a genius in this area. I read the script, and I hadn’t played a character like that before. She had a lot of different levels to her, and she really grows from how you see her in the beginning – being vulnerable, not really having a voice, and not sure who she is — to then, towards the end, without ruining anything, being a very strong, confident woman who really takes control.

There were different things I did with her as she grew. It was nice to not play just one level. I got to show different sides, and it was great to be able to show the vulnerability, but then her becoming just an empowered female at the end and coming into her own. It was what she always was but never had the confidence to become who she is in the end.

MovieWeb: Kathryn did have a transformation, and I feel like it’s immediately evident to audiences when the shift begins. Shiloh, I’d like to ask you the same, what drew you to the character of Duke?

Shiloh Fernandez: Chadd and I had worked together on Long Nights Short Mornings, one of my favorite experiences. I ran into Ashley in a grocery store in Laurel Canyon, where I lived, and we were trying to get her for that movie. I bothered her in this grocery store, and she had no idea who I was and kind of ignored me. [laughs] We had wanted to work with Ashley for a long time, and when Chadd wrote the script, he thought of her immediately. Not only is she one of my best friends, but I’m a huge fan of hers, and he just knew that she was right for the movie.

Chadd’s one of my favorite directors to work with, and I got to somewhat help put this movie together. I grew up in a rural place in northern California where half the people are country hick types, and half are hippies. So, there is a duality that I grew up with, and I really enjoyed that in my character.

I think that if I wasn’t an actor, I don’t really know what I would do, but I’d probably be a pretty good criminal. [laughs] So there was something to draw on there. His manipulative nature and the fact that he’s been a hustler his whole life. He’s taken advantage of people, and in this particular instance, he feels seen by Ashley’s character. He feels real love from her. So, it trips him up and makes him act differently in this one case. Which, I won’t give away the ending, but that’s where it goes.

Of course, it’s a huge challenge to not, in the first half, give anything away. Then in the second half, really try to be the same character but show a different side. I just loved that challenge, and working with Ashley and working with Chadd was super attractive.

‘This one is special…’

MovieWeb: Before we end, Shiloh, on social media, I saw your post about Private Property, and you described the film as “This one is special.” I just wanted to ask what makes this one special for you?

Shiloh Fernandez: Thanks for seeing that and asking about that. I mean, honestly, I think Ashley gives the most incredible performance. We’ve done a few movies together, and she literally is so good in this film. I was like, ‘Chadd, are we gonna rehearse? Are we going to do this or going to do that?’ And she showed up and just nailed it. She’s done that on every other film, but this one, in particular, I just think she’s incredible.

You see the trailer, and it’s sort of this thriller. But I think there are a couple of things about this movie — you can take it at face value and enjoy the thriller aspect, but there are also deeper allegories within it. Private property, class warfare, and all those things make this film special. It also just means a lot more to me because I got to make it with people that I love, like Ashley and Chadd. We all gave it our all, and I think it’s a really special one. It’s one of my favorites.

MovieWeb: That’s great to hear. The passion and social commentary definitely shine through in the film, so I’m glad you touched on that aspect before we wrap. Thank you both for your time!

Where Was Vision During Doctor Strange in the Multiverse of Madness?

Melissa is an Associate Editor for MovieWeb and a Rotten Tomatoes-approved film critic. She has served as an official film judge for the FEARnyc Horror Film Festival and Women in Horror Film Festival. Melissa enjoys covering annual film and pop culture events around the country, including SXSW, Tribeca Film, E3, PAX, Fantastic Fest, Dallas International Film Festival, and more.

Camille A. Brown on Finding Her Place in the Legacy of Ntozake Shange’s for colored girls | Srtalent