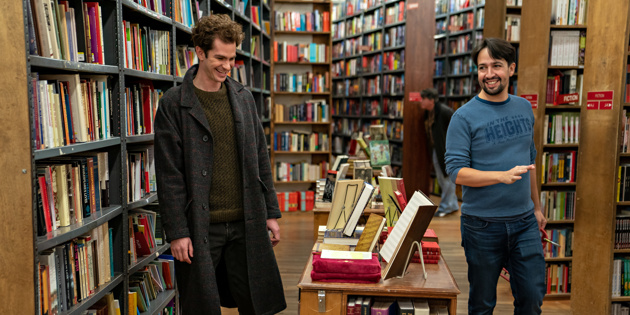 For years, Rent mastermind Jonathan Larson’s tick, tick…BOOM! has been a cult favorite. Now, it’s been adapted as a star-studded film, playing in movie theaters and on Netflix. On the latest episode of The Broadway Show, Broadway.com Editor-in-Chief Paul Wontorek spoke with the film’s director Lin-Manuel Miranda and star Andrew Garfrield about honoring Larson’s legacy with the movie adaptation. “In the Heights and Hamilton don’t exist without Rent being the trailblazing force that it is,” Miranda, who makes his directorial debut with the film, said. “I think he needed to write this show to clear space for Rent.”

Both Larson and his body of work were new to Garfield, whom Miranda approached about the starring role after witnessing his Tony-winning performance in Angels in America. “I feel so connected to this piece—so connected to Jonathan and to Lin and to this whole company. I’m so proud of Lin. I’m so grateful to him—that he had the courage to take this on and the kind of insanity to bring us a little along for the ride. I feel like Jonathan is smiling,” Garfield said.

“It’s deeply overwhelming to think that I get to have a spot in the attempt to honor such an incredible artist, someone who is so profoundly life-changing for musical theater and for so many other musical theater artists—Lin included,” Garfield continued. “To feel like I have a chance to honor that person—that is the most profound gift that I get to be a part of.”

Watch the full interview below, and head here to check your local listings for The Broadway Show. Hosted by Emmy-winning anchor Tamsen Fadal, it is the only nationally syndicated weekly theater news program.

Saweetie Says She Wants a Baby