An Entertainingly Tenebrous Take on the Survival Road Thriller 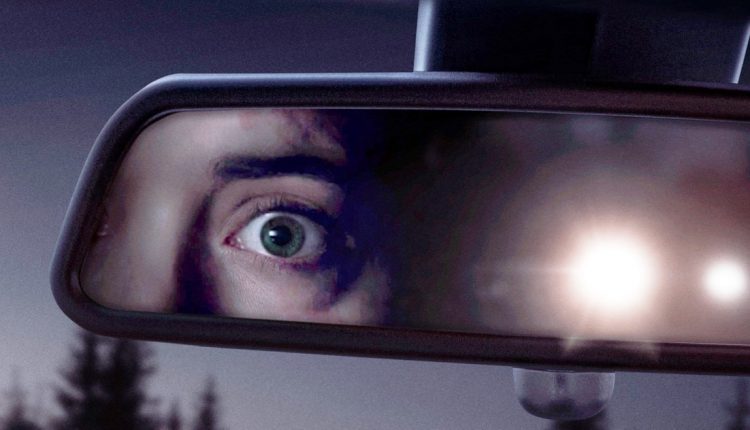 Road thrillers are a fun subgenre with few misses, and while many favor electrifying action sequences and zany charm in their psychotic assailants, recently-released Alone relies on a remote, woodsy setting and an emotionless feel to pull audiences along a grimmer road to survival.

Given we’re still sitting deep in the strictly streaming period of films that will continue unforeseeably, I’m grateful for anything new and remotely interesting hitting a platform I use. Alone recently popped up on Hulu, striking me as, at its possible worst, a conventional psycho chase thriller flick to pass time. It’s darker, uncannier, and of course stylistically cooler than a glance at the plot summary would indicate.

RELATED: Streaming This Weekend: Antebellum, The Devil All the Time, Alone and More

Alone is a brutally intense stalker thriller with familiar anecdotes but an especially cold tone and approach that lends to a darkly gripping viewing. Director John Hyams, who has a long history in television direction, wedges in a mesh of thrills so aggressive it feels like a different film from act to act. What begins as a Duel-esque road hunt becomes a bleak victim trapped in a sadistic bastard’s basement saga, only to shift back to a violent run from a psycho thriller. What remains constant is the overwhelming feel of emptiness, assisted by a secluded setting and creepily minimal score that’s for the most part just sounds of nature and breath. There’s no charm nor much emotion in any of Alone’s characters. No sparks of life in any interaction. Very few comedic moments to lighten the load, unless strictly dry and direly dark is your avenue. To its credit, Alone is as pulse-pounding as a film so lifeless could be, and the sick rawness of it all enthralling.

Jessica (Jules Willcox) is a young, recently widowed writer who flees the city to heal and work on a novel. While driving throughout the Pacific Northwest she’s tormented by a reckless driver. After a cat and mouse game, the man behind the wheel (Marc Menchaca,) am emotionless creep who fails miserably at turning on psychopathic fake charm, eventually captures Jessica and holds her in the basement of his remote cabin. After her escape, the chase is back on for Jessica. The psycho in pursuit is more clever than she could have imagined, and willing to take out anyone who interferes with his hunt.

Reading the Alone synopsis, you have to recognize commonplace tropes here. They’re present through this excruciatingly tense journey, but these age-old, action-heightening twists all have a uniquely mean flare. It’s hopeless occurrence after hopeless occurrence for poor Jessica, who we mainly only care about based on principle. She’s a sad young woman processing an awful tragedy, just driving to clear her head, and now she’s undergoing hell; fighting for her life at the hands of a heartless, evil creep who couldn’t bother to throw in a joke or be entertaining every once in awhile.

However, Jessica isn’t one to feel deeply for beyond the obviously tragic circumstances. Our resident psychotic stalker/nameless killer, played by the talented Marc Menchaca, isn’t one to have affection for, either. Some writers and directors take the “make this guy an oddly likeable nut” path, or try to give a killer some comically redeeming qualities. Not the writing/directing team of Mattias Olsson and John Hyams. This psycho is a dead-in-the-eyes, infuriatingly malicious turd. The others we see along this forested battle for survival are mere pawns in the game, though hunter Robert (Anthony Heald) is a sweet and compelling character who brings the flick a brief moment of heart.

Early on we’re thrown into a potentially deadly road game that spurs a nail-biting sequence. With thrills underway we’re eager to meet this widow-torturing madman behind the wheel. Considering old films that previously tackled this maniac tormenting strangers on the road game, i.e. Duel, The Hitcher, or Breakdown, one’s led to believe a viciously colorful character is ready to show himself.

Enter an uncharismatic, mayonnaise-toned creep with a mustache and pedo glasses.

Our guy in Alone is anything but colorful, but his repulsive disconnect from feeling, gross way of manipulating, and bland delivery of heartless thoughts soon becomes crucial to the film’s freezing cold intensity.

When chase turns to held in captivity is when the tone begins making more sense and setting in effectively. No matter where you rate her on the compelling scale, you can’t help but enthusiastically root for somebody’s survival once they’re locked in an insane man’s basement. I’ll admit, the film hits a disturbing lull amidst the cabin lockdown. Saw-like torture territory seems possible, which would have turned me completely off an initially rousing scenic chase . Instead, the mustached psycho stalker just chooses to be a weirdo who grabs Jessica and whispers a lot. While it’s a little skin-crawling, thus in line with the overall unsettling factor, the momentum shift can take a viewer out if they weren’t fully committed.

Fortunately, Alone sets out on the run again, and meandering shots of still, endless woods add hopeless chill to the thrill of the hunt. Jessica’s a fighter, and resourceful. The mustached man is a fascinatingly evil son of a bitch who won’t give up. The relentless need to kill, and relentless will to live make for a rigid ride with dark surprises and shockingly brutal moments. Hyam’s crafts the long game of strategically navigating survival – exciting, but carefully paced to keep matters eerie as anxiety runs high.

The film’s final third packs dramatically-increased levels of violence, and impressive fight from both characters, for whom matters have grown personal. Though Alone cranks the energy up to high voltage as a close nears, it stays true to grey form, steering clear of synths or dramatic sounds. A touch of light chimes is all it takes for the mood to stay tense.

Jules Willcox and Marc Menchaca are great as Jessica and the madman. Jessica finds her way from terribly sad, to terribly afraid, to beaten down but hellbent on killing a man. Jules handles that range and makes Jules the smart survivor you want to see make it and seek vengeance. As a character, Jessica has already lost her zest for life by the beginning of the film, so it’s hard to truly love her. And what can be said for Marc as the psycho? He does a stand up job as the void of all feeling, unpleasant maniac who holds women captive in a secluded cabin. Is he menacing and a little on the scary side? Sure. That’s all we can ask for. Do I typically like wilder behavior or more wisecracks from my kidnapping madmen? Yes, but perhaps I’m just old school.

Alone, all in all, is an entertainingly tenebrous take on the standard chased by a maniac thriller. It follows the general blueprint, though it’s shot through a greyer lens, with raw violence, new thrills, and less frill. This airs on the more distressing side of chase movies, and maybe isn’t a film you’ll be going back to for repeat enjoyment. Plainly, there just isn’t much to feel for throughout watching, aside from rooting for expected revenge. As it is, Alone is an eerie thrill ride with neat visuals, a few shocks, and an interesting heartlessness to it.