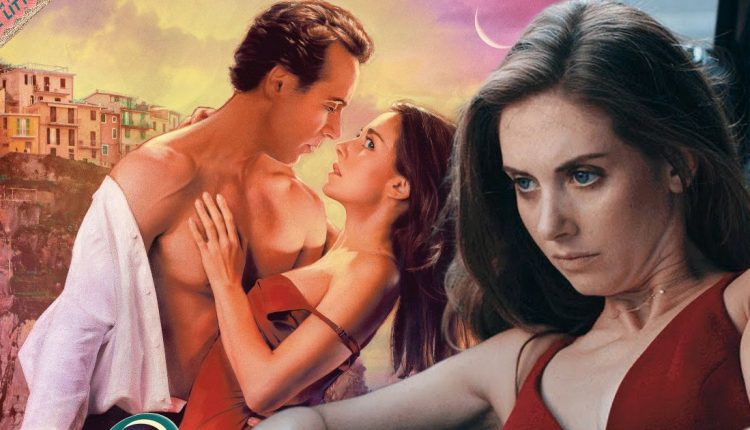 Going through Jeff Baena’s filmography is akin to flipping the pages of a scrapbook stitched together with photographic evidence of good memories and better friendships; there are plenty of familiar faces and funny moments. Spin Me Round continues this trend, featuring a bounty of funny people from previous Baena films — Alison Brie, Molly Shannon, Fred Armisen, Debby Ryan, Lauren Weedman, and Baena’s wife Aubrey Plaza. On top of these comic riches, Spin Me Round adds the brilliance of Tim Heidecker, Zach Woods, Lil Rel Howery, Ben Sinclair, and Alessandro Nivola. Sight unseen and plot unknown, Spin Me Round warrants consideration for this cast alone.

However, what Baena and Brie (his co-writer here, hot off their bleak masterpiece Horse Girl) do with Spin Me Round is more interesting than the usual kinds of films in which a dozen comedians are brazenly tossed into a room and asked to be funny. What they cook up is a quiet, funny, weird little dish that certainly stands out from the typical flavors most people are used to at the comedy buffet, for better or worse.

It may be too ambiguous for some, with many scenes prompting the question, “Is this perfect parody, or just stupid?” Spin Me Round exists in this kind of awkward sphere, arguably the same occupied by thinkers as diverse as Riley Stearns and Andy Warhol, and is pretty divisive as a result. Nonetheless, if your palette is brave enough, it’s well worth a taste.

Spin Me Round Takes Alison Brie to Italy

This is appropriate because the film concerns an everyday working-class employee of an Olive Garden-style restaurant named Amber (played by Alison Brie, who co-wrote the film), who gets invited to participate in a seemingly luxurious, all-expenses-paid trip to beautiful Tuscany. There, the artifice of banality that enshrouds the usual workaday person pushes up against the chic, affluent veneer of Italian opulence.

Related: Best Movies About Food That We Can’t Live Without

Once in Tuscany, Amber is accompanied by other franchise restaurant workers and managers for an educational vacation courtesy of the film’s stand-in for Olive Garden (‘Tuscan Grove’). Amber is joined by an assortment of wonderfully ‘regular’ people — polite fanboy Dana (the endlessly brilliant Woods), condescending know-it-all Fran (Heidecker, always the perfect scumbag), passive-aggressive and needy Deb (the hilarious Molly Shannon), and several more. The class-conscious disparity is immediately highlighted as the group is sent to stay in a Days Inn-style motel nextdoor to a palatial mansion, and is fully spelled out when Nick arrives.

Spin Me Round is the Anti Eat Pray Love

Nick, the CEO of Tuscan Grove, visits the group of employees to say hello and becomes smitten with Amber in the process. He wines and dines her with his lavish lifestyle, and the film begins a clever deconstruction of the toxic ‘rich boy, poor girl’ romantic plot in countless films (Fifty Shades of Grey, Pretty Woman, Maid in Manhattan, et cetera ad infinitum). As soon as viewers think they have Spin Me Round figured out, though, it flips the script and plays with the expectations and cultural homogeneity of this cinematic cliché, a malevolent fairy tale in which a person gets chosen to join the elite upper class.

Spin Me Round is also providing a smart, feminist twist on the exceedingly lame ‘white woman goes to Europe and gets her groove back’ plots of Under the Tuscan Sun, Eat Pray Love, and several others. Spin Me Round is interested in subverting all these tropes that suggest a woman can become ‘whole’ and fulfilled through a man, money, travel, or really anything other than herself.

Ultimately, Amber learns to trust herself and grow from the inside out and not the other way around. If there is one person who truly inspires that, however, it would be Kat. Kat is honestly one of the downright coolest characters that Aubrey Plaza has played, and that’s saying something. This is a woman with a rather firm grip on her own desires, limitations, and abilities, and it shows. Kat is the assistant to Nick, but it’s fairly obvious that she’s entirely her own person, less of an assistant and more of an accomplice.

Kat sneaks Amber out of her cooking lessons at Motel 6 and drives her around Tuscany, leading her to Nick. Spin Me Round is endlessly clear here — Nick is neither the hero nor the most interesting character in the film despite his utter luxury, apparent emotional vulnerability, and smooth good looks. Amber is her own hero in the film, even if it takes her a while to figure that out. Like most people in life, especially the underclasses, Amber is rather passive, existing at the whims of culture, socioeconomics, relationships, and powerful people. In a way, Spin Me Round is an excellent depiction of how we all get swept up (or spun round), sometimes off our feet but sometimes under the rug.

Amber gets swept up in Kat’s sexy, nonchalant adventurousness in arguably Spin Me Round‘s best sequence of events outside its final scene. Lit by yellow light in the Italian night, the women travel through the alleys and promenades of Tuscany, and it’s a real treat. This ultimately results in a kiss between the two.

This small moment has been talked about more than anything else in the film (because of course it has), and it actually deserves to be discussed, not for any male gaze fantasy but for how much of an awakening it is for Amber to the complications of desire, the power of the feminine, and what an actual good time is like outside the confines of cultural expectations and decadence.

Spin Me Round is a Different Kind of Funny Movie

This definitely isn’t a traditional rom-com, however, so viewers shouldn’t expect any predictable narrative consequences of that kiss, or anything else, really. In Spin Me Round, surreal, ridiculous things rear their head unexpectedly, as if to remind the audience again that life is often out of our hands, something summarized best with an old joke: How do you make God laugh? Tell God your plans.

Not all of this randomness is going to work for people, and from the majority of reactions so far, it hasn’t. Baena’s films have the interesting ability to balance sweetness and genuine affection for characters with absurdist silliness and almost asinine dialogue, to the extent that some might confuse an exaggerated, satirical joke for a literal, completely stupid moment. It’s often hard to tell the text from the subtext, if there even is any at certain moments. Some of it immediately lands and is funny, while some of it may linger like an odd aftertaste, where the viewer isn’t quite sure if they’re enjoying it or not.

Spin Me Round is funny in both senses of the word — ‘funny haha,’ and funny as in just plain odd. As such, it’s a funny film, even when you’re not laughing. Of course, it’s a joy to merely hang out with this wonderful cast in beautiful Tuscany; Spin Me Round is the kind of movie where a documentary about its production might even be just as enjoyable, simply because so many hilarious and interesting actors and filmmakers had the opportunity to live together for a while and wander Italy. Fingers crossed for a featurette on the Blu-ray.

Spin Me Round is basically delightful, even if it won’t work for everyone, and can feel a little odd. It’s a loose, relaxing, fun film with an incredible ensemble cast, yet manages to be extremely perceptive about class disparity and a woman’s sense of self, pushing against the standard fantasy narratives that are often sold to women, where everything’s solved by men and money. The final scene of the film is so refreshing, so liberating, and wonderful, that it seems to put everything in perspective, strengthening the film’s weaker moments with glorious hindsight.

From IFC Films and AMC+, Spin Me Round is a Duplass Brothers Production and Limelight Production and will be in theaters, On Demand, and streaming on AMC+ on August 19th. The film is produced by Jeff Baena, Alison Brie, Mel Eslyn, Chris Parker, and Dylan Sellers.