Alex Essoe Talks Death of Me, Her Doctor Sleep Experience and More [Exclusive] 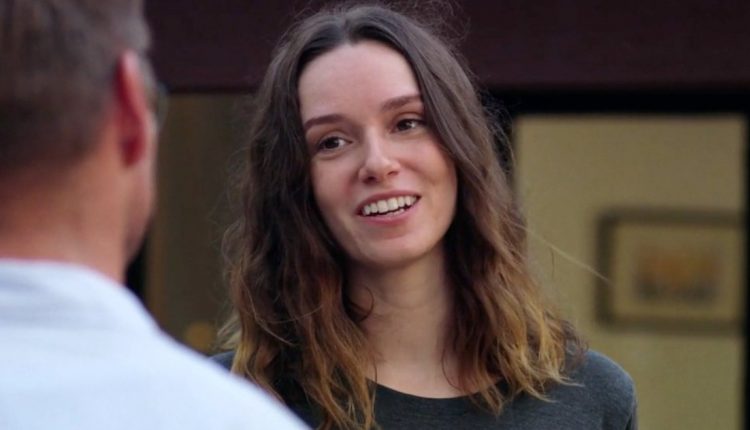 Alex Essoe has been working as an actress for years but finds herself in the middle of a magic moment. Last year, she starred in Doctor Sleep, Mike Flanagan’s sequel to The Shining, as Wendy Torrance. This year, she’s appearing in The Haunting of Bly Manor and she recently began filming Midnight Mass for Netflix. On top of that, she has a new movie coming out called Death of Me, which hails from director Darren Lynn Bousman (Saw II, Repo! The Genetic Opera).

Death of Me centers on a vacationing couple, Christine and Neil. They are on an island off the coast of Thailand and wake up hungover with no memory of the night before. They soon discover footage on Neil’s camera and look on horrified as he appears to murder Christine. They are left with 24 hours until the next ferry departs, with a typhoon threatening the island and must attempt to reconstruct the night’s events.

RELATED: Death of Me Review: Maggie Q and Luke Hemsworth Suffer the Vacation from Hell

I recently had the good fortune of speaking with Alex Essoe in honor of the movie’s release this weekend. We discussed the crazy couple of years she’s had, what it was like playing such an iconic role in Doctor Sleep and much more. Enjoy.

Thank you so much for doing this today. We’re here to talk about Death of Me, which is your new flick. Just for the sake of our readers, would you be so kind as to set the movie up for them and tell us how you fit into things?

Alex Essoe: Absolutely. So the movie is about this couple played by Maggie Q and Liam Hemsworth. He has this exotic travel show. He’s [in Thailand] with her, partly to do research for the show, but also partly to mend their relationship and have a little vacation together. I play the person who is renting the Airbnb that they’re staying in. They go out one night and they go to this mysterious bar. They blackout. They wake up. They’re in their room going, “What the hell happened? I feel terrible” Then a chain of events starts happening where they realize that any attempt that they make to leave the island is thwarted. At first, for the most benign of reasons. Like, “Oh, we just missed the boat.” or, “Oh, we can’t find our passports.” Things that seemingly wouldn’t alarm too much. They’re just inconveniences, but it starts to compound. During this time, the two of them are separated and then we are just with Maggie for the majority of the movie.

Darren Lynn Bousman directed this and I spoke to him recently. He was great. He struck me as a very cool guy.

Alex Essoe: He is a very cool guy, yeah.

Alex Essoe: I love working with Darren. Darren is hilarious. He creates a very easy atmosphere on set, which is cool, considering how demanding the shoot was. We were filming this during the rainy season in Thailand. So we were getting rained out almost every day. And then when it was time for a scene where we needed rain, there was none. Of course. That was kind of fun. He really was grace under pressure. He always was joking or putting people at ease. I felt very comfortable, very safe with him as a director. He’s a great dude. Great conversationalist. It was really nice. We would all go for beers and talk, and just pick his brain about stuff.

In a more broad sense, it seems like in the past couple of years specifically, your career has started to go quite well.

There’s that whole joke of the ten-year overnight success story. The audience sees the overnight and the other person sees the ten years. Have you felt the change these past couple of years? Or has it just felt like part of the same journey to you?

Alex Essoe: Oh, well, it’s kind of both. I mean, I felt the change in the sense that my quality of life has gotten much better. It was kind of garbage before all of this [laughs]. I mean, even after Starry Eyes there were many very mean years in a city where it’s not easy to have those. So in that regard, I mean, I definitely am not living hand to mouth anymore. I know that’s not really what you’re asking, but that’s been a very practical change. This is the first time in my life I haven’t had to have one or two side jobs aside from acting.

Alex Essoe: Yeah I mean, I’m not rich or anything. A lot of people after I made Starry Eyes thought that I was a millionaire [laughs]. It’s sweetly naive but it’s also funny because I’m thinking, I made like two grand on Starry Eyes. Then I lost my job in the process. So it’s interesting. But, in the other sense, I don’t feel different really at all. I’ve been recognized a couple of times, which is fun. It’s weird when a stranger is like, “Oh! Alex Essoe!” And you’re like, “What?! How do you know my name, man?! Then you’re like, “Oh, right. You saw the thing I did.” That’s a little strange.

Alex Essoe: It was intimidating for sure, because I have so much personal reverence for that film, and her performance specifically. I thought Shelley Duvall was absolutely perfect as Wendy. I thought she played that role with so much bravery and honesty. In that regard, that was intimidating because I can’t just do an impression of her. I have to know the things that she knew when she was doing this. So, even though I had seen The Shining like 25 times or something like that, I became very obsessive about it. The voice and the physicality, and making that not an impression. Putting that in a natural place. It’s challenging but at the same time, one of the most fulfilling experiences I’ve ever had. The Shining is one of my favorite movies. I’m beside myself with joy.

Working on Doctor Sleep was kind of a turning point for me personally. I felt like I was waking up from a dream, if that makes any sense, while I was working on this. It was such an amazing experience. I made lifelong friends on that movie. And luckily Mike [Flanagan], God bless him, if he likes an actor he’ll work with them again. He has curated this little family. It was such an enriching experience. I would go hang out on set even when I wasn’t shooting. I would just go and shadow Mike. Just watch how he works and how he edits, because his background is in editing. I learned a ton.

Just before we go, is there anything else you want to plug? Anything else that you’ve got coming up?

Alex Essoe: Yes. There is a movie out right now that I wrote, produced and star in called Homewrecker. It made the festival rounds last year, and now it’s on VOD and streaming and stuff. Check it out! It’s a dark comedy. Very proud of it.

Death of Me arrives in theaters, on demand and digital on October 2 from Saban Films.

Topics: Death of Me