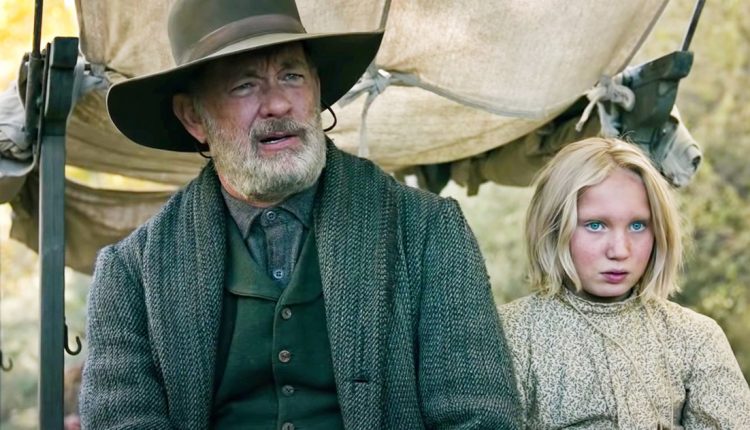 Tom Hanks returns to theaters in a well-acted, but predictable and tone deaf western. News of the World is adapted from the Paulette Jiles novel by British writer/director Paul Greengrass. It is the story of a former Confederate soldier returning a girl kidnapped by the Kiowa in Reconstruction era Texas. The film is beautifully shot and hearkens back to genre classics like The Searchers. It suffers the same critique by being too myopic. American Indians and freed slaves, ruthlessly subjugated after the Civil War, are integral to the narrative, but vaguely addressed on screen.

News of the World opens in 1870 Wichita Falls, Texas, five years after the Civil War. On a rainy night in front of a spellbound crowd, Captain Jefferson Kyle Kidd (Tom Hanks) reads an assortment of newspapers with flourish. The former Confederate soldier travels from town to town reading the news for a modest living. A quiet and unassuming man, Captain Kidd rides into a brutal aftermath the following day. He finds a lynched black man, and a young white girl (Helena Zengel) in a buckskin dress, hiding in the nearby woods.

RELATED: There’s No Crying in Baseball, But Tom Hanks Sure Cried a Lot While Shooting News of the World

Captain Kidd recovers the dead man’s diary. He was tasked by the Union to return the child to her family in Southern Texas. Johanna Leonberger was taken by the Kiowa tribe after they killed her family. She was raised as an Indian, doesn’t speak English, and is fearful of white men. Union soldiers found her when they forced the Kiowa off their lands. Captain Kidd takes Johanna to the garrison on the Red River, but they deny responsibility for the girl. Refusing to abandon her, the captain resolves to take Johanna back to her relatives; four hundred miles south through dangerous territory.

News of the World is an engrossing character drama. Tom Hanks and German actress Helena Zengel play off each other to great effect. Captain Kidd has been physically and emotionally scarred by the war. Johanna has lost two families to bloody violence. She is frightened, but not timid or weak. They share the burdens of a tragic past. The girl has a fierce spirit, but is still a defenseless child. Captain Kidd is forced to defend Johanna against ruffians who want to assault her. Paul Greengrass (United 93, The Bourne Supremacy) does not shy away from the horrors a girl faced in the old west.

News of the World has superb cinematography, but it’s used stylistically to marginalize the American Indians depicted in the film. Let’s start with the good. Polish cinematographer Dariusz Wolski (Pirates of the Caribbean franchise, The Martian) is expert on establishing vivid color schemes. He and Paul Greengrass depict Texas as brown and dusty with a muted palette. It’s a captivating look that draws the viewer in. My issue is that the Kiowa are never really seen. The Indians are portrayed as silhouettes throughout the film. They are relegated to background and distant shots. This makes zero sense when their presence is crucial to the story. News of the World falls prey to the cultural insensitivity that has plagued Hollywood from start. Don’t even show the Kiowa if you’re just going to use them as props.

My feelings regarding News of the World are decidedly mixed. On one hand, the film works as a character piece with solid lead performances. But I’m sorely disappointed in the way Greengrass represents the Kiowa and the film’s sole black character. I’m no bell ringer for political correctness. But we need accuracy and correct representation, especially in a film with Tom Hanks star power. Fans of the western genre will like this movie, so it does warrant a begrudging recommendation. News of the World is a production of Playtone and Pretty Pictures. It will be released theatrically in the United States on Christmas Day by Universal Pictures.

Topics: News of the World