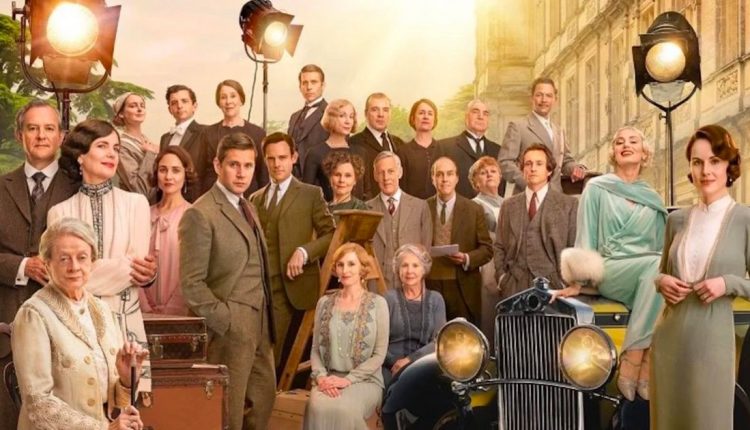 English period costume drama’s reigning champion returns to theaters with a fantastic sequel. Downton Abbey: A New Era has Robert (Hugh Bonneville) and Cora (Elizabeth McGovern) Crawley traveling to the South of France; while their eldest daughter, Lady Mary (Michelle Dockery), contends with a film shoot at their magnificent home. Creator/writer Julian Fellowes continues to show his mastery of juggling numerous characters in complex situations. The Crawley family deals with change as their aging matriarch ensures the estate thrives for future generations. The film succeeds at being dramatic, hilarious, and heartfelt. Downton Abbey: A New Era is a shining example of all the puzzle pieces fitting perfectly together.

In 1928, the Crawley family celebrates the wedding of Tom (Allen Leech) and Lucy (Tuppence Middleton) Branson. Tom’s daughter, Sybbie, is the granddaughter of Robert and Cora. Her mother, Lady Sybil Crawley, died when she was born. Violet Crawley (Maggie Smith), the Dowager Countess of Grantham, stuns everyone with surprising news. An old acquaintance has gifted her a villa in the South of France; which Sybbie will inherit. Robert has no idea why someone he has never heard of would give his mother such a valuable property. He agrees to take Cora, Tom, Lucy, Lady Edith (Laura Carmichael), their second daughter, and the irascible butler, Carson (Jim Carter), to France.

The Crawleys arrive in France to a mixed welcome. The Marquis de Montmirail (Jonathan Zaccaï) agrees to transfer the villa. His mother, Madame Montmirail (Nathalie Baye), decides to challenge her late husband’s will. Back in England, the film hits an unexpected snag, forcing Lady Mary into action to save the struggling production. Long-held secrets come to light in both countries.

Related: On the Count of Three Review: A Brilliant Black Comedy Tackles Suicide and Depression

The film explores the class divide par excellence. The aristocrats and their dutiful servants have a loyalty to the estate. It needs money to carry on the Crawley name and employ the locals. The Crawleys respect their employees’ hard work. The arrival of the film shoot throws a wrench in that understanding. In France, Robert faces a troubling realization. He’s a kind man but readily acknowledges that Mary is in charge. The women in his life, mother, beloved wife, and eldest daughter are the family’s backbone. They depend on iron-willed servants, like the grumpy Carson, to steer the Crawley ship through troubled waters. This symbiosis is the heart of Downton Abbey’s survival.

Oscar-winner Fellowes (Gosford Park, The Gilded Age) breathes life into each character. He expertly builds underlying narratives that strengthen the story as a whole. Subplots galore address thorny societal issues. For example, Thomas Barrow hides his homosexuality. Lady Mary and his trusted co-workers know this secret. Barrow’s subtle romance with Guy Dexter is brilliantly staged and written. They dance around their affections. Fellowes deftly pursues a secret love without overburdening the film.

Downton Abbey: A New Era is superbly acted across the board. Michelle Dockery and Maggie Smith stand out as the strongest characters. Violet’s cunning and skillful leadership have been the anchor for her family. One of the film’s best scenes has Violet imparting crucial wisdom to her dear granddaughter. She has meticulously prepared Mary to carry her mantle. Another subplot between Mary and Jack Barber, the film’s frustrated director, tests her resolve to family and duty above all.

I saw the first installment but not one episode of the television series. Frankly, I despise the idea of aristocracy and avoid works that romanticize classism. Fellowes aptly straddles the line to create a believable bridge between both worlds. The rich and poor alike are represented in an authentic way. Downton Abbey’s legion of loyal fans and neophytes are going to love this movie. Count me in as well.

Downton Abbey: A New Era is a production of Carnival films. It will be released theatrically in the United States on May 18th from Focus Features.

Julian Roman has been with Movieweb for nearly twenty years. An avid film buff, he feels lucky to have interviewed and written extensively about Hollywood’s greatest talents. In his spare time he plays guitar, treasures good company, and always seeks new adventures.

Harry Styles is in love: 5 key takeaways from his new album