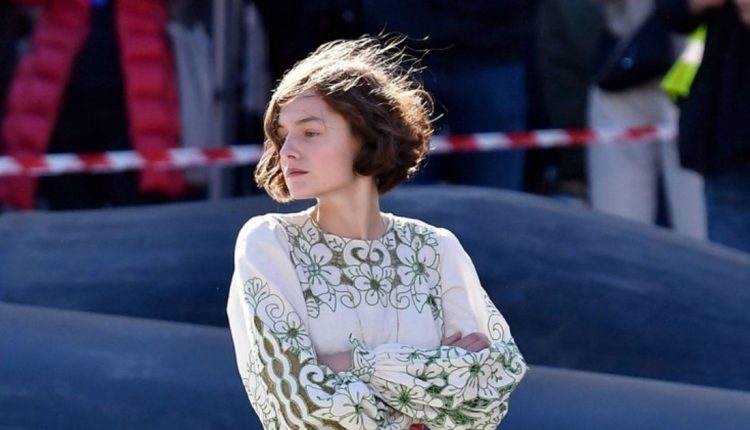 Lady Chatterley (Emma Corrin) has an illicit affair after being ignored by her cold husband (Matthew Duckett).

D. H. Lawrence’s classic novel gets a smoldering adaptation that will certainly make hearts flutter. Lady Chatterley’s Lover is an exquisite period romance told in a sensually artistic way. It explores the thirst for companionship and physical intimacy. The rigid patriarchal boundaries of a classist society trap a lonely wife and her smitten paramour. She must choose between true happiness or a gilded prison of privilege. A difficult choice when public scorn could lead to poverty and destitution. English period costume drama rarely quickens the pulse to this fiery degree.

Connie Reid (Emma Corrin) marries Sir Clifford Chatterley (Matthew Duckett) in London during World War I. Their aristocrat families bundle food rations to make the event festive. Connie’s sister, Hilda (Faye Marsay), wonders if she will be happy with such a proper gentleman. Connie confirms her devotion to Clifford. She will wait anxiously as he heads off to fight.

Less than a year later, the Great War ends and Clifford returns home paralyzed from the waist down. The couple move to Wragby, his recently deceased father’s palatial country estate. A wheelchair-bound Clifford and Connie begin the task of hiring servants. Connie wears down caring for her husband’s needs without any thought of her own. His inability to have intercourse has left him cold and selfish.

Connie walks the beautiful grounds to escape her depression. She finds a safe haven in the company of Oliver Mellors (Jack O’Connell), the quiet and thoughtful gamekeeper haunted by his time in combat. Connie’s stunned when Clifford offers an indecent proposal. Wragby needs a male heir to continue the Chatterley lineage. Connie should have a liaison just for this purpose, but everyone would think the child was his. A hurt Connie spirals further down. She nearly reaches her breaking point when the attraction to Oliver finally takes hold.

An Illicit Affair Has Consequences

Lady Chatterly’s Lover clearly defines the consequences of an illicit affair. Oliver, just like everyone else in their small village, works for the entitled Lord Clifford. He owns the farmland, homes, and pretty much every aspect of livelihood. Connie’s wealth and status lies in her position as his wife. She and Oliver face ruin if discovered. The film does a fantastic job of contrasting the two men. Clifford believes he was born to rule servants. Oliver understands the value of hard work, kindness, and decency. It’s understandable why Connie would be so taken by him. Although being ruggedly handsome does help.

Graphic nudity and titillating sex scenes abound. Don’t watch expecting a salacious skin flick out for cheap thrills. French actress turned director Laure de Clermont-Tonnerre (The Mustang) beguiles with crafted anticipation. Connie and Oliver don’t plunge into each other’s arms. They’re lost souls being pulled together for a cosmic impact. The intensity of their connection burning hotter with each clandestine encounter. Clermont-Tonnerre shows that love cannot be restrained. It’s a force of nature with no escape and can be just as destructive in the aftermath. Following your heart isn’t easy with everything at stake. Emma Corrin’s brilliant in a daring and affecting performance.

Lady Chatterley’s Lover is a production of Blueprint Pictures and 3000 Pictures. It is currently available to stream on Netflix.