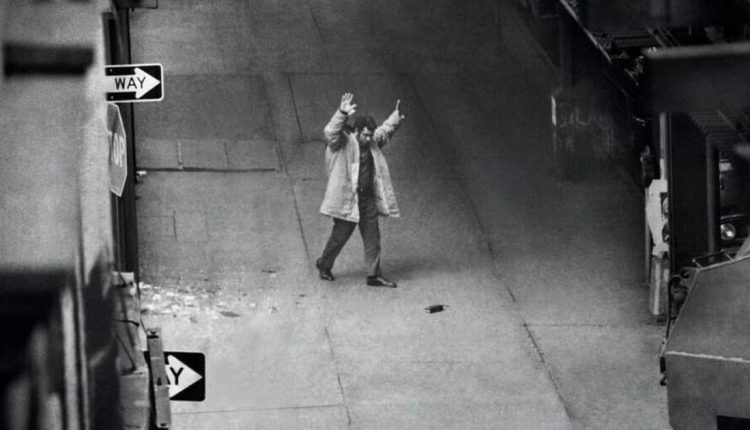 In 1973 Bushwick, Brooklyn, four twenty-something African-American Muslim men entered John and Al’s Sporting Goods store with the intent to steal guns. Hold Your Fire recounts a terrifying siege that would change police tactics. The documentary rivetingly portrays the birth of hostage negotiation in a city boiling with racial tension. A dangerous situation that lead to innocents shot, and an officer killed was diffused by a revolutionary New York Police Department (NYPD) psychologist. Harvey Schlossberg PhD represented an ideological shift in confronting violence. Going in guns blazing had historically led to unnecessary casualties. Schlossberg and progressive leadership in the NYPD took a chance on a new methodology.

Hold Your Fire follows the botched robbery and resulting hostage situation from the surviving participants’ point of view. The robbers, hostages, and police officers have vivid recollections. They differ vastly in reasoning, but no one wanted to die. The film is a fascinating exploration of the racial and class divisions in society. What transpired was not a random crime or terrorism. The men were stealing for their safety, but foolishly followed a violent path stoked by distrust of whites and frustration.

Shu’aib Raheem, Duwad Rahman, Yusef Abdallah Almussadiq, and Salih Ali Abdullah were Muslim converts who grew up in abject poverty. Shu’aib and Duwad, who both speak prominently throughout, lived on “sugar water” and “ketchup sandwiches” as children. They became friends after converting to Sunni Islam. The men publicly denounced the teachings of the Nation of Islam. They were targeted by the black nationalist group for execution. Their efforts to buy guns legally was thwarted by the NYPD. They painted all Muslim groups with the same dangerous brush. Shu’aib resorted to drastic measures after his wife was attacked in their apartment.

Jerry Riccio, the store manager, gives honest and thoughtful commentary. He quickly realized these men were amateurs. They couldn’t even carry the heavy bag of stolen weapons. The store had twelve customers inside. Fonnie Buckner, an older black woman with a family, cried hysterically. Rosemary Catalino, just sixteen at the time, tried to calm her. Shu’aib fires a shot to prove their seriousness, alerting someone outside who called the police.

At that time, the Black Liberation Army was a terrorist group that targeted cops. The NYPD surrounded the store with hundreds of officers. Shu’aib and Duwad understand they have made a horrendous mistake. Captain Al Baker and Officer Al Sheppard claim the men fired first. Shu’aib swears he was coming out to drop his gun. A torrent of gunfire erupts from both sides. Mussadiq, the angriest of the group, gets shot in the stomach. Outside on the street, Officer Tony Gilroy is killed. The robbery has now exploded into a street war.

Hold Your Fire uses archival footage, news reports, still photos, and thrilling audio to stage the deadly scene. Crowds of angry black youth surrounded the police line. They despised and distrusted cops. Baker refuses to say police are ever racist but acknowledges that white policemen are outsiders to the ethnic neighborhoods they patrol. Brian Tuohy, the partner of Tony Gilroy, expresses the rage burning through the NYPD. One of their own was murdered by Muslim terrorists. They needed to strike hard and kill these men.

Baker admits that the rank and file cops hated the NYPD Commissioner Patrick Murphy. He and his black deputy, Benjamin Ward, foresaw a bloodbath. There were twelve hostages in a building loaded with ammunition. Harvey Schlossberg, incredibly just a traffic cop at the time, appeals to Murphy. He’d seen the awful conclusions of the Attica Prison Riots and Munich Olympics Siege that left many civilians dead. Schlossberg makes a bold and unheard of suggestion. They invite Gerald Lefcourt, a white lawyer who defended the Chicago 8, to open a line of communication.

Talking to terrorists was never previously considered. They were bad guys who you give time to surrender, then attack overwhelmingly to minimize losses. Schlossberg, a Russian Jew whose family survived pogroms, knew this was a mistake. They had no idea who the robbers were or their agenda. One of the film’s best scenes has Shu’aib and Riccio differing from Baker in their account of the initial gunfight. Baker swears that the cops were firing above the hostages in the store. Riccio categorically says that wasn’t true. He could feel their bullets whizzing by his arms.

Stefan Forbes (Boogie Man: The Lee Atwater Story), serves as director, editor, and cinematographer. He pulls no punches in exposing stark truths during the interviews. Shu’aib and Duwad acknowledge their crime. They take full responsibility for their actions. The NYPD officers, Riccio, Rosemary, and Fonnie Buckner’s daughter are shown their apologies. The police and victims come to different conclusions about forgiveness. Riccio’s final thoughts are the most moving.

Hold Your Fire is an astounding film that touches many nerves. Negative police interactions with minorities continue to be problematic. Criminals must be penalized for breaking the law. The film doesn’t give them a pass. It emphatically shows that communication is critical to diffusing threats. Harvey Schlossberg was groundbreaking in his handling of dangerous hostage situations. Establish common ground, build trust, and prevent bloodshed if possible. Schlossberg’s teachings have saved thousands of lives.

Hold Your Fire is a production of InterPositive Media. It will have a concurrent theatrical and streaming release on May 20th from IFC Films.

King Kong: All Movies in Order

Julian Roman has been with Movieweb for nearly twenty years. An avid film buff, he feels lucky to have interviewed and written extensively about Hollywood’s greatest talents. In his spare time he plays guitar, treasures good company, and always seeks new adventures.