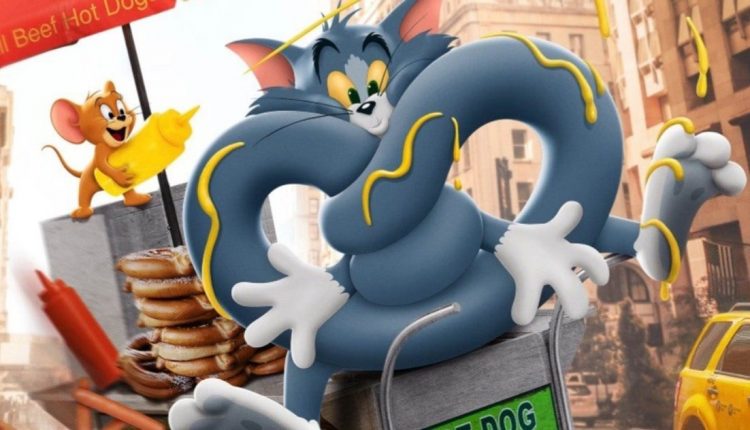 Tom and Jerry return to theaters and HBO Max in a hipster, live-action film that’s strictly for younger children. The classic Hanna-Barbera cat and mouse cartoon are still the best of frenemies. But get a modern update that rankled my old-school sensibilities. I knew things were going to be different when an animated pigeon starts rapping in the opening scene. The film isn’t a musical, but there are a few auto-tuned songs that turned me off completely. That said, Tom & Jerry are still up to the usual bag of tricks. Tom chases Jerry, gets pummelled in numerous creative ways, and Jerry escapes laughing. Kids will be entertained by the hijinks. Adults and fans of the shorts will find the updated storyline lacking.

Tom & Jerry opens in New York City with the two critters on different missions. Jerry is looking for a new place to live. He’s not impressed with the accommodations offered by his real estate rat (Utkarsh Ambudkar). Tom plays keyboard in Central Park under the guise of being blind. In a random turn of events, Jerry wrecks Tom’s prized piano and the chase begins.

Chloë Grace Moretz stars as Kayla, an unemployed young woman who scores free meals at the prestigious Royal Gate Hotel. She bluffs herself into a temporary job, but is immediately under suspicion from Terrance, the uptight events manager (Michael Peña). The hotel is hosting the celebrity event of the year. Superstars Ben (Colin Jost) and his fiancé, Preeta (Pallavi Sharda), are having a lavish Indian wedding at the Royal Gate. He has a flatulent bulldog, Spike (Bobby Cannavale); while she owns a pampered cat, Toots. The hotel erupts into chaos when Jerry takes a liking to the posh surroundings. Kayla is assigned the task of removing the bothersome rodent. She recruits the perfect cat for the job.

Let me start off by admitting the difficulty in adapting a 1940s cartoon for a 21st century audience. Children today are more sophisticated. Thankfully, the animals remain animated characters and not pure CGI. The basic interplay remains the same between Tom, Jerry, and Spike. Director Tim Story (Barbershop, Shaft) and screenwriter Kevin Costello (Brigsby Bear) go overboard with a plot driven by social media celebrity fluff. The wedding at the center of the story is fashioned after uber-famous couple, Nick Jonas and Priyanka Chopra. Also, there are scenes where Chloë Grace Moretz and her bartender love interest (Jordan Bolger) flirt about the latest style of Air Jordan sneakers. These plot points are lost on me, but may resonate with a younger demographic. Regardless, they are just not funny and seem like filler more than anything else.

Jerry is a big jerk for the majority of the film. This caught me by surprise. He cruelly destroys Tom’s keyboard, and pretty much beats him to a pulp in every situation after. The cartoon never depicted Jerry as mean-spirited. He was the brunt of Tom’s ire for a specific reason. Tom was sent to dispatch Jerry by the racist “mammy” character. Who was always heard yelling “Thomas!”, but never seen. The filmmakers obviously couldn’t use that set-up here. It’s just a strange deviation to make Jerry unlikeable. I never thought I’d be rooting for Tom to catch him.

Tom & Jerry‘s human elements are frankly negligible. The ensemble cast are talented actors, but aren’t humorous or entertaining. Tom & Jerry‘s shenanigans with Spike and Toots are the animated highlights. They cause rampant destruction, which elicited minor chuckles along the way. Children will be amused by these scenes, but I don’t believe the hour and forty minute runtime will hold their interest. This version of Tom & Jerry may gain a new audience, but probably won’t appeal to older and die-hard fans. Tom & Jerry is produced by Warner Animation Group, Hanna-Barbera Productions, and Turner Entertainment. It will be released concurrently by Warner Bros. in theaters and HBO Max streaming on February 26th.