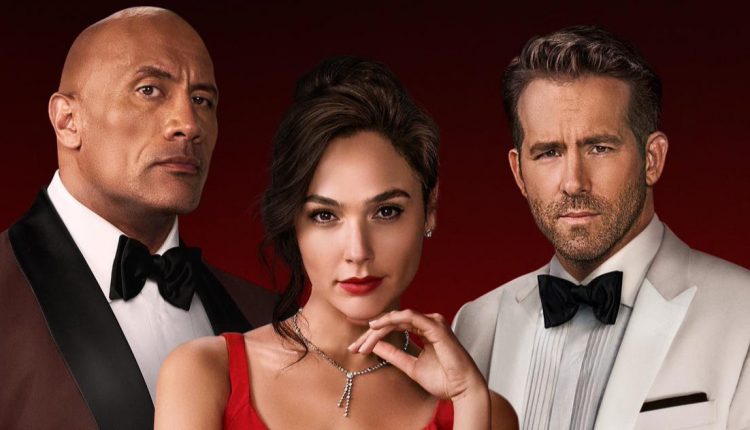 A-list Hollywood stars have zero chemistry in an utterly tiresome and contrived heist flick. Red Notice takes Dwayne Johnson, Ryan Reynolds, and Gal Gadot on a globetrotting egg hunt. Each actor phones in their trademark mannerisms for an action-comedy template. There’s little original or engaging despite the big-budget action scenes and exotic locales. Red Notice ends up looking like nothing more than flashy costume jewelry.

Dwayne Johnson headlines as criminal profiler, FBI Special Agent John Hartley. He accompanies an Interpol officer (Ritu Arya) in her pursuit of notorious art thief, Nolan Booth (Ryan Reynolds). Who’s on a mission to steal two of Cleopatra’s jeweled eggs before another master thief. The Bishop (Gal Gadot) has an uncanny ability to outwit competitors and law enforcement at every possible turn. The real prize being to discover the location of the long lost third egg. Thus uniting a trio of priceless artifacts and claiming the bragging rights mantle of the world’s greatest thief.

It’s always disappointing when a talented ensemble fails to achieve cohesion. Red Notice inserts each blockbuster actor into the narrative like a cog in a machine. Dwayne Johnson is the tough guy straight man. Ryan Reynolds doles out dry sarcasm with his standard smarmy delivery. Gal Gadot wears designer clothes to ballroom dance and beat people to a pulp. There’s no effort whatsoever to differentiate the characters. We’ve seen the same schtick performed vastly better by these players.

Writer/director Rawson Marshall Thurber (Central Intelligence, Skyscraper) borrows liberally from classic pop cinema. Red Notice has obvious influences from Indiana Jones, The Thomas Crown Affair, and True Lies. There’s nothing wrong with paying artistic homage. Imitation is the best form of flattery. Unfortunately the film comes off like a robot was programmed to make a blockbuster. Thurber has to be more creative in his approach. He needs brushes of personality to his cast and plot. Thurber’s third collaboration with Dwayne Johnson is easily the most generic.

A successful franchise can’t just be cranked out like sausage. Red Notice has the right pieces, but fails to put together the puzzle. There really wasn’t any stretch of the runtime that grabbed me. A high production value, decent editing, and visual effects bolster the rating from dismal. I hope the inevitable sequel is a vast improvement. Red Notice is produced by Flynn Picture Company and Seven Bucks Productions. It is currently available in limited theatrical release and streaming globally on Netflix.