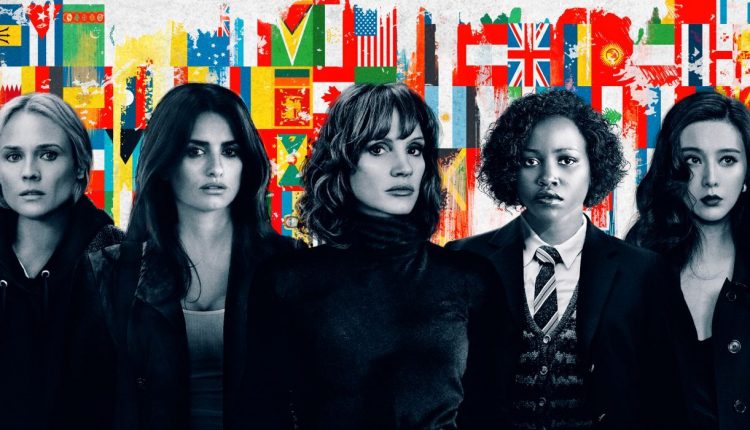 A CIA agent (Jessica Chastain) leads a team of female spies against cyber terrorists in The 355.

An international ensemble of A-list Hollywood actresses kick a whole lot of ass, but cannot save a spectacularly convoluted espionage actioner. The 355 has a team of formerly adversarial female spies banding together to stop cyber-terrorism. They literally chase a backpack around the world while beating, stabbing, and shooting a bevy of baddies along the way. The film is loaded with ludicrous plot twists that are broadcast from a mile away. The 355 will certainly give action junkies a legitimate fix. An overly long runtime and poor script unfortunately kneecap the talented cast.

Jessica Chastain stars as CIA agent Mace Brown. She and her partner/lover, Nick (Sebastian Stan), are tasked with recovering a hard drive from a rogue Columbian officer (Edgar Ramirez) in Paris. The drive contains cyber tools that can compromise any networked computer system. The exchange does not go well. Other parties, including German agent Marie Schmidt (Diane Kruger), are also gunning for the cyber weapon.

Mace finds herself on the run. She recruits Khadijah (Lupita Nyong’o), an old friend and former MI6 computer expert, to help her find the drive. They soon find themselves allied with Marie and an innocent Columbian therapist (Penelope Cruz) ensnared in the turmoil. The women are blindsided by betrayals as a ruthless enemy pulls strings from the shadows. They get another ally (Bingbing Fan) when the Chinese government joins the fray.

The 355 has more twists than a bag of pretzels. The biggest being glaringly obvious within minutes of the first act. The story then bounces back and forth as the spies realize there’s no one they can trust. The antagonists have somehow infiltrated every government organization, but struggle mightily to get their hands on the drive. The same problem laughably persists for the protagonists. They easily hack every computer, get into any secure location, but somehow can’t snatch a bag from speedwalking terrorists. None of it makes any sense, especially when the baddies keep leaving our heroes alive for no reason whatsoever.

The action scenes are brutal and well-choreographed. Jessica Chastain and Diane Kruger have elaborate chases and fights that escalate to a bullet-spraying climax. The 355 needed to trim the narrative fat around the action. Screenwriter turned director Simon Kinberg (X-Men: Dark Phoenix) achieves the female empowerment goal. The cast delivers the action goods in spades. My interest waned as the plot continually tossed in left-field developments. The final act strains credulity to a breaking point.

You’ll have to watch The 355 to understand the title’s meaning. An elite team of ass-kicking female characters is given their due by a top-tier cast. Jessica Chastain can do no wrong in my opinion. The all-star team works well together. I sincerely hope to see them in a sequel. But the plot for this film is too scatterbrained. It’s completely nonsensical and mind-numbing over two hours. The 355 is produced by Perfect World Pictures and Freckle Films. It will have an exclusive theatrical release on January 7th from Universal Pictures.

Here’s Why Captain America: The Winter Soldier is the Best MCU Movie of All Time

As impressive as the MCU’s movie catalogue is, Captain America: The Winter Soldier is the best MCU movie of all time. Here’s why.