A Knives Out Mystery and Her Love of Acting 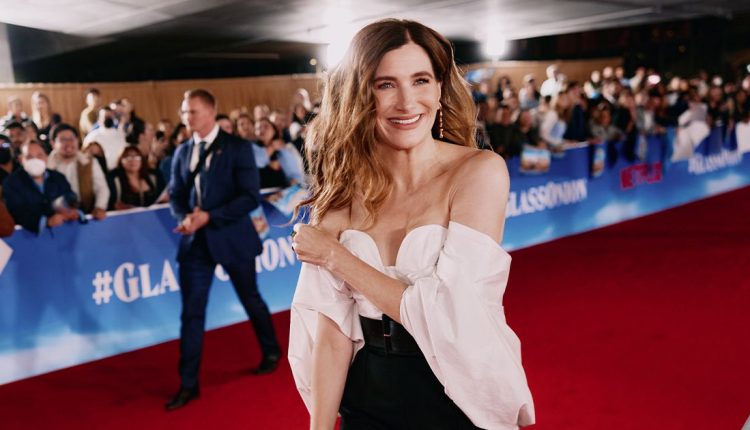 Has Kathryn Hahn cast a spell on Hollywood? We can’t get enough of the actor. The WandaVision fan favorite and upcoming Agatha: Coven of Chaos star is riding a career wave that’s downright magical.

Some say the rise in attention began when Hahn turned heads playing mysterious Agatha Harkness opposite Elizabeth Olsen’s tormented Wanda in Disney+’ s WandaVision—she’d go on to nab her own series, dropping in late 2023, when she’ll return as Agatha. But flashback seven to eight years, and you’ll see Hahn has been hard at work. From her standout roles in Parks and Recreation and Happyish to I Love Dick and Transparent, the actor has laid the groundwork for her current success.

Enter: Glass Onion: A Knives Out Mystery, which hits theaters November 23. Playing jittery politician Claire Debella, Hahn is in good company in writer-director Rian Johnson’s ambitious and inventive follow-up to the box office behemoth that was Knives Out—that film generated more than $310 million at the box office. A Knives Out 3 is reportedly in the works from Netflix, too. But let’s not get ahead of ourselves.

The trailer has been watched seemingly nonstop, but for newbies, listen up: The fiery plot finds Blanc returning for a new adventure. This time, the stalwart detective attends a lavish private estate on a Greek island. How and why he comes to be there is part of many puzzles to be solved in Johnson’s sequel. When Blanc meets a disparate group of friends gathering at the home of a billionaire (played by Norton) for their yearly reunion, things begin to unravel. Discovering a dead body doesn’t help.

On the flipside, the film is a wild ride and Hahn couldn’t stop gushing about working with Johnson and the cast.

In Glass Onion: A Knives Out Mystery Hahn takes a delightful stab at playing Connecticut governor Claire Debella, one part of a truly messed up latter-day St. Elmo’s Fire posse braving middle-age and other dilemmas.

“Claire has a very limited palette, which is beige,” Hahn quipped of her character’s attire. “But I think that makes her stand out. And it’s also what I love about her. Within this very narrow confine, visually, I had a lot of freedom to play, which was really fun.”

The heart of the whodunit, though, lies in the creative beast that is Rian Johnson (The Brothers Bloom, Looper, Breaking Bad, Star Wars: Episode VIII—The Last Jedi). Johnson nabbed an Oscar nomination for Best Original Screenplay from the first Knives Out and here, creates a rare sequel that is funnier and more action-packed than round one.

Related: Exclusive: Taylor Russell on Acting Alongside Timothée Chalamet as Cannibal Lovers in Bones and All

“Rian’s mind is something else,” Hahn said. “I cannot understand how he’s able to pull it off again and again. His screenwriting is incredible. When you read the script, you can’t believe he’s going to do it. And he does. It’s such a fun ride. My hope is that people can really go into this knowing as little or nothing about the film. Because that’s when it’s the most fun. And I just hope people can keep it to themselves, so that others can be as surprised when they watch it.”

There’s plenty of twists in the sequel, in fact, and no doubt buzz will continue to build around it once audiences experience it and word of mouth grows.

On Her Acting Roots

Last month, Hahn, who was born in Westchester, Illinois, a Chicago suburb, was honored with a Career Achievement Award at the 58th Chicago International Film Festival. Of the tribute, she said: “This is very humbling. Career Achievement—wow. I still have a lot to do. I look at that sweet reel of my work, and l think, ‘Wow, she’s been all over the place.’”

No kidding. Beyond her roles in WandaVision and Transparent, fans have been diggin’ her turns in The Shrink Next Door and Mrs. Fletcher. But flashback to 2017’s A Bad Moms Christmas or her role as Lily Lebowski in Crossing Jordan back in the 2000s, and you realize there was always an actor there dedicated to the craft.

Hahn credits Chicago for honing her love of acting—and so much more—in fact. “Chicago was the city where I had my first real burrito,” she shared. “And I always knew from, like 6 years old, that I was going to be an actor. I just knew. I didn’t care the medium or the routes or ‘the how.’ There just simply wasn’t a choice. And Chicago was the city that told me I was an actor.”

Related: TIFF 2022 Review: Glass Onion: A Knives Out Mystery is a Riotous Sequel With a Phenomenal Cast

While attending Northwestern, Hahn fell in love with Chicago’s local theater scene and suddenly found herself surrounded by and looking up to the city’s many rep companies.

“Chicago knows a rep company,” she noted. “Most of my favorite actors come from Chicago and these are hardworking professionals who are ensemble-driven and have their egos checked at the door. They’re prepared and ready to explore. But the writing is the thing. And so, the Knives Out sequel is everything like that, and it’s all Rian Johnson. It’s an ensemble.

“We had a backstage—weirdly, literally—and there was no movie star crap,” Hahn went on. “We just all hung out, we danced, and Leslie Odom Jr. taught us how to play chess. We became friends—as a group. And Daniel Craig was just like one of us. We were just there for each other, and it was safe.”

Chances are Glass Onion: A Knives Out Mystery will do well at the box office. In the meantime, Hahn is currently in production on Hulu’s limited series Tiny Beautiful Things, based on the best-selling novel of the same title by Cheryl Strayed.

When asked how she stays “grounded” with all the creative moving pieces in her life, Hahn bellowed with laughter and affection. “I have teenagers. They’re not afraid to make me feel as humble and grounded as possible—at all.”