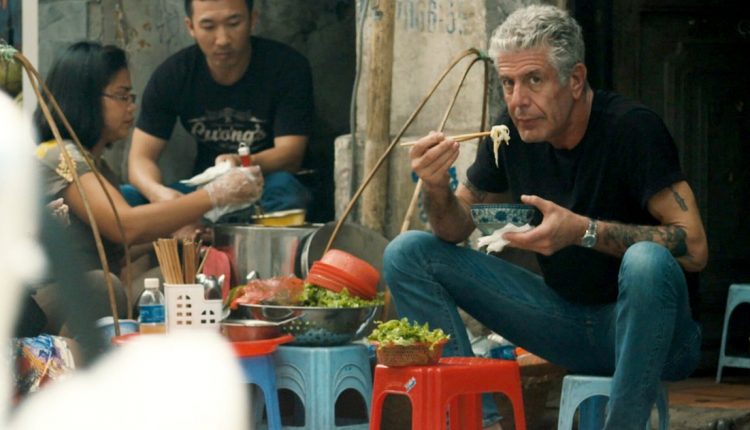 Anthony Bourdain is remembered fondly in a heartbreaking retrospective of a great adventurer. Roadrunner: A Film About Anthony Bourdain takes an intimate look at a complex individual. Award-winning documentarian Morgan Neville explores his life from meteoric stardom to shocking 2018 suicide in provincial France. Bourdain’s friends, colleagues, production team, and second wife, Ottavia Busia, speak frankly about their tragic loss. But it is Bourdain’s own haunting words that best illuminates his hopes, dreams, and struggles. He experienced the world on a grand scale. It was not enough to silence his personal misgivings.

Roadrunner begins in 1999 with Anthony Bourdain at forty-three as the executive chef of the French Brasserie Les Halles in New York City. A recovering cocaine and heroin addict that started in the kitchen as a dishwasher, Bourdain was perennially in financial distress. Philippe Lajaunie, the owner of Les Halles, comments how Bourdain always had difficulties paying bills. But he had a strong relationship with his wife, Nancy Putkowski, and enjoyed writing rambling essays to his close circle of friends. These prolific discourses snagged Bourdain a book deal. “Kitchen Confidential: Adventures in the Culinary Underbelly” was an instant bestseller that propelled Anthony Bourdain into the limelight. He was soon on book tours, the Today Show, and even Oprah Winfrey.

The film introduces his agent, Kim Witherspoon, then Lydia Tenaglia and Christopher Collins, the married founders of Zero Point Zero Productions, who filmed Anthony Bourdain from the start. It’s fascinating to see him at his nascent beginning on television. Tenaglia was stunned by Bourdain’s shyness. He was awkward and reserved on camera. When they booked their first series for the Travel Channel, she discovered that Bourdain had never left the country. He’d only read about distant lands and people. The early footage of Anthony Bourdian shows the concerted effort he put into his craft. He was not a natural, but learned to express himself on screen through extensive written preparation.

Anthony Bourdain became a household name with the success of “A Cook’s Tour” in 2002. The next decade was a whirlwind of fame, fortune, and extensive travel. Most significantly was his courting and marriage to Italian martial arts expert, Ottavia Busia. He stunned his brother, producers, and closest friends by becoming a father. Their daughter, Ariane, was born in 2007. The film has unseen footage of Bourdain trying his best to be a father. Cooking was his connection to family life. But Bourdain spent two hundred and fifty days of the year filming his various shows. He was largely absent from his family. This separation took an inevitable toll.

Chefs David Chang, Eric Ripert, artist David Choe, and musician Josh Homme were dear confidants of Anthony Bourdain at this stage of his life. They discuss a man changed by the journey. His television series transformed from a culinary to lifestyle focus. Bourdain, after harrowing shoots in Lebanon and Haiti, felt a journalistic need to show real people in countries often demonized by western media. The footage from Libya, the Congo, and Iran portrays Anthony Bourdain at his most introspective. This soul searching, combined with his recent divorce, marked a change in his personality.

Lydia Tenaglia, his longtime directors, and production assistants had major issues with Asia Argento. Bourdain was smitten by the Italian actress. He had a manic focus that poured attention on her interests. Asia Argento became an integral part of his globally popular CNN show, “Parts Unknown”. She then went public, as part of the burgeoning Me Too movement, of her rape by Hollywood mogul Harvey Weinstein. Bourdain, who had largely stayed away from social commentary, went after Weinstein with a firebrand. He had found a cause célèbre, but it was entirely born from his obsession with Argento. The film is direct in this regard. The footage of the Zero Point Zero team showing disgust with Argento’s presence is quite obvious.

Roadrunner‘s final act will bring you to tears. It’s difficult to watch those who worked, knew, and loved Anthony Bourdain grapple with his suicide. Eric Ripert, who was filming with Bourdain in France at the time of his death, refuses to speak about it, others weep openly. He had a daughter that loved and needed him. They don’t understand how he could have left her behind. David Choe, in a particularly distressing interview, talks about his crushing sadness and anger at the glorification of Bourdain’s suicide. Ottavia Busia, in her final public comments, wonders what she could have done differently.

Anthony Bourdain talks candidly throughout the film about his early embrace of the rockstar ethos. He rebelled against a good upbringing to be a junkie. He thought you couldn’t really be cool without suffering. In his most poignant vignette, he acknowledges that he had a great life, and was lucky to be loved. Depression is a dark cloud that blocks hope. It’s distressing to think that he felt such loneliness in his final moments.

Help is available 24 hours a day at the National Suicide Prevention Hotline, (800) 273-8255. Please call if you’re feeling hopeless and alone. Roadrunner: A Film About Anthony Bourdain is produced by CNN Films, Tremolo Productions, HBO Max, and Zero Point Zero. It will be released theatrically by Focus Features on July 16th.

Black Adam Wraps Filming, The Rock Thanks His Team with Emotional Speech and $10K Prize

Watch Normani, Cardi B team up for steamy ‘Wild Side’ video