A Ghastly Hallucinatory Trip, But Ultimately A Letdown 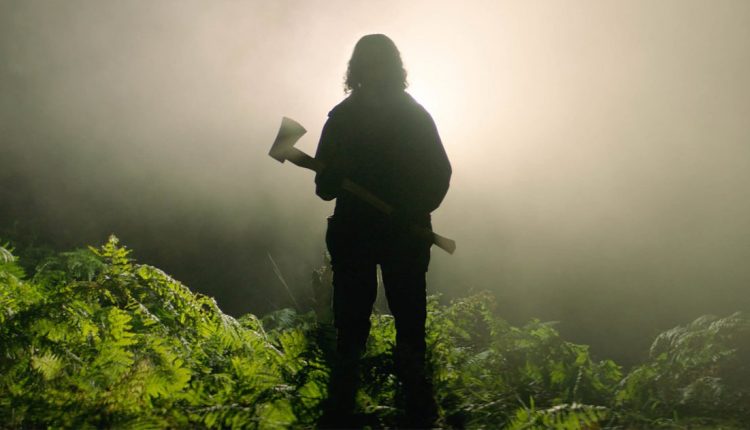 Ben Wheatley’s low-budget, hallucinatory mishmash horror In The Earth poses promising terror, following a scientist and park ranger as they venture deep into a remote forest to check on scientific equipment while the world battles a deadly virus. An ambiguous evil force within the woods awaits, as does horror in human form.

The film starts like an uncanny doomy gloomy throwback, carried by psychedelic visual appeal and an engrossing ambient score, only to devolve into a violent and gross plain jane thriller. Ghoulish frights of the dark arts variety are sprinkled about; the workings of the universe are brought into question, science collides with spirituality, but most of these ideas are sidestepped making way for flesh piercing and trippy arthouse flare. In The Earth is a ghastly ethereal trip, but not as much to think about as it promises.

We open looking out upon vast wooded land through the hole of a cave, followed by close shots of a sledgehammer smashing down upon rocks. Martin (Joel Fry) walks along rural roads, dressed like he’s backpacking, before reaching Gantalow Lodge. He’s greeted at a “Disinfection Point” outside by a woman in a hazmat suit and a man in a surgical mask. The man shares that multiple in the village have died.

Martin then meets his guide, park ranger Alma (Ellora Torchia,) a seemingly bright and sage gal who shares with Martin a local folktale. We learn Martin has been in isolation for 4 months. The two venture off into the forest together, where they’ll be checking on equipment. Martin is getting reacquainted with the many sights and sounds of “outside.” Alma essentially drags Martin along, who’s lost, wimpy, and a bit useless.

First night camping there’s a violent cawing in the distance. An air of dark despair permeates just a day into their trek. They spend a short period lost and arguing. The camera moves fluidly but unstably, looking onto the pair like an intruder, shedding a sense of wretchedness awaiting.

They find the tents of a family who appear to have gone missing. Martin discovers a strange rash on his leg. Later that evening he’s beaten out of his sleep by a man. In the morning he awakes to find all of their clothes and supplies stolen. Alma’s alive though she also suffered a beating. As if it all couldn’t grow more inconvenient, Martin slices his foot.

The two run into Zach (Reece Shearsmith,) seemingly friendly vagabond who stays in the woods illegally. He shows Martin and Alma to his tent, where he offers to help with Martin’s foot. It quickly gets weirder when Zach shows cuts on his arm. He rants endlessly about an all-powerful force in the woods. Someone “in the earth.”

Soon he’s making moves branding the pair of heroes, drugging them, and staging them for his strange folk art pictures that are apparently rituals to this dark force in the woods. There’s a brief period of grotesque torture in a tent with hammy black comedy acting from Zach, which thankfully runs short, lending way to pulse-pounding thrill as Alma forges an escape. Tense scenes ensue as Zach targets Elma with a crossbow, accompanied by low shots of him sweeping the ground with an axe.

A machine in the woods starts blinking like a vibrant strobe light. Senses become hallucinatory. An acid-dipped electronic score sounds as seizure-inducing lights flash. Martin and Alma eventually meet an unlikely friend, and the move to safety begins.

I wish In The Earth was as powerful, frightening, and memorable as I anticipated it being in the film’s beginning. Wheatley shows us a grim-looking nowhere with a palpable feel of unearthliness. Martin’s arrival at the bungalow in the sticks places a weaker, timid person in an inherently creepy environment, made more intimidating by the end-of-the-world virus that’s ravaging the world. Martin’s newly freed from isolation into a hellish forest beaming with dark energy alongside Alma, whom he doesn’t know. The score’s set to haunting, psychedelic perfection every step of the way. 80s electronic pulsing and eerie bells chiming. The camera moves in on Martin and Alma villainously. An undefined evil lingers, as folktales and ancient spiritual practice are alluded to.

Wheatley sets us in a particularly menacing plot of woods, puts vulnerable characters in a sort of cryptic danger, and does so with an artsy flare and mind to atmosphere that’s to be commended. Unfortunately, most of the horror that materializes comes in the form of psychotic violent human antics that edge into cliche, modern-horror torture zone.

In The Earth is gripping, I’ll say. When Zack enters the equation the film rises to weirder levels and the bursts of chases and fights are no doubt pulse-pounding. The artsy, drug-laced sequences that litter the film’s last 20 minutes are a strange, impressive spectacle. However, the film sets up to be so much more than axe-wielding maniac, nail-through-the-eye escapades, but that’s mostly what transgresses. Artistic editing can’t leverage a scare. Tricky shots can’t unsettle a viewer. This may all be artistically sound and an impressive effort creatively, but In The End is short on terror as it fails to make use of the atmosphere provided and concepts alluded to.

We’ve seen “crazy guy tortures innocent people” horror flicks a thousand times. This film’s more than that, in terms of showiness and flare, but at its core In The Earth is just that – Alma and Martin fighting for survival in the woods as they escape a madman. There’s nail-biting scenes. As mentioned, everything looks impressive and visually inspired. There are times when it feels as though new tropes will unfold, or other horrors will be discovered, but Wheatley stays the safe, gratuitously violent route. It’s a letdown given the heavy dose of delirious, strange atmosphere going on.

If everything didn’t open feeling like a film John Carpenter made and scored in the 80s, perhaps expectations wouldn’t have been set so high. Ben Wheatley can make a film through an artist’s eye. The whole project at least moves in a shroom trip-like fashion, emitting the feel of unforgettable terror to come. That terror never quite shows itself, but it’s interesting to watch and listen to. I can’t call In The Earth a great horror film. It’s a well-made movie that exhibits the signs of a talented director. Visually, it’s strange and special and evidently the work of a film student who’s seen a few horrors and tried a few drugs. It’s just not a memorable piece of horror that makes use of its ideas and delivers in the original scares department. If you’d like to check out this hallucinatory chiller, it’s now available to stream on Hulu.