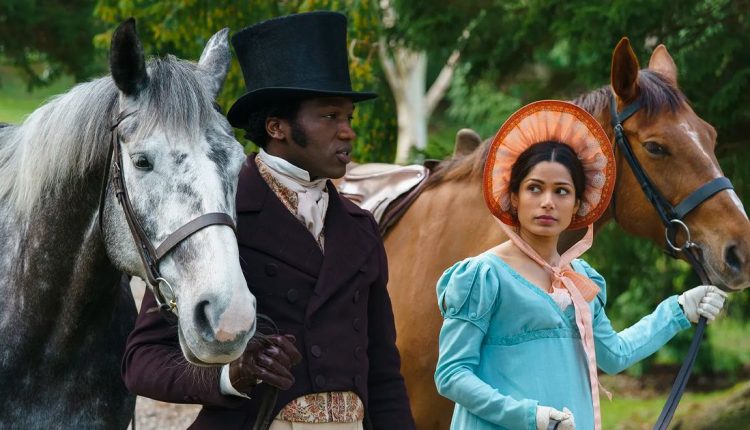 A spurned aristocrat schemes to humiliate society’s hottest bachelor with her radiant best friend and meek cousin as accomplices. Mr. Malcolm’s List is a funny and charming period romance in the vein of Jane Austen. An ethnically diverse ensemble shakes off the usual costumed drabness with endearing chemistry and witty frivolity. The breezy pace and elegant settings help to keep hearts fluttering. The plot’s outcome is never in doubt. The happy ending is assured, but that doesn’t make the journey less enjoyable.

In 1802 England, the wealthy Julia Thistlewaite and poor vicar’s daughter, Selina Dalton, meet as girls at Mrs. Finch’s boarding school. Sixteen years later, Julia (Zawe Ashton) and Selina (Freida Pinto) have not yet married. Julia chafes at no longer being a debutante after “four seasons” on the ballroom circuit. Meanwhile, in the countryside, Selina fends off a proposal from a crusty old suitor. He warns she’ll soon be a destitute spinster.

London’s noble bachelorettes all clamor for the attention of the fabulously rich and handsome Jeremiah Malcolm (Ṣọpẹ́ Dìrísù). He’s earned a reputation as a “trifler” after numerous rejections. The snobby and superficial Julia fails to impress on their date. She’s incensed when her cousin, Lord Cassidy (Oliver Jackson-Cohen), spills the beans on Malcolm’s list. He keeps a checklist of necessary qualities in a suitable wife with intelligence being a primary virtue.

Julia decides that Jeremiah Malcolm needs comeuppance. She requests the brainy Selina join her in London. Selina and Cassidy are shocked by Julia’s hurtful plan but feel obligated to help. Julia’s ecstatic when Malcolm takes an interest in Selina; who finds him attractive and charismatic. The plot thickens with the arrival of Captain Henry Ossory (Theo James). He’s also got an eye for Selina. Julia finds herself in the unexpected position of having two hunky studs competing for her lower-class bestie.

Mr. Malcolm’s List skillfully mocks dated and patriarchal notions of women. Julia believes that beauty and subservience are the only qualities needed in a wife. A man surely cannot find an intelligent woman attractive. Who wants someone smarter and more capable? Her entire self-worth is based on dutifully getting married. Selina also feels that pressure but refuses to be servile. She accepts her loveless fate without compromise.

Malcolm’s right to be discerning but takes his opinionated nature too far. He uses the list as a shield to cover his own insecurities. Selina, who’s not just parroting Julia’s instructions, is unlike any woman he’s ever met. She puts Malcolm in his place when needed. Selina is the prize that he’s been trying to win. Captain Ossory’s interest in Selina takes him by surprise. The coin flips as Malcolm becomes the pursuer with stiff competition.

Mr. Malcolm’s List had a smashing trial run as a hugely popular 2019 short film based on the novel by Suzanne Allain. Director Emma Holly Jones and Allain were able to expand on the short’s premise for a delightful feature adaptation. They succeed in creating an enchanting atmosphere. There’s a tangible sweetness nestled in the old-fashioned pomp and circumstance of the day. Malcolm requesting the pleasure of Selina’s company makes her feel desirable. She can’t help but open herself to love’s warm embrace. Julia’s hurt and jealousy are understandable. It’s difficult to watch others achieve what you desperately want.

I must admit to being skeptical before watching. My high bar for romance and comedy isn’t usually met by English period films. Mr. Malcolm’s List has noticeable flaws but leaves your heart full. It gets top marks as a date movie.