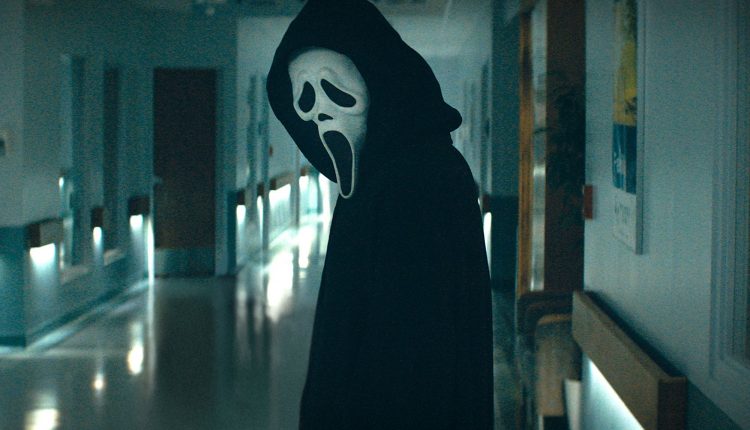 The Ghostface killer returns in a self-deprecating, fan service buffet of a slasher sequel that’s woefully short on scares. Scream’s twenty-fifth-anniversary relaunch will have audiences laughing out loud as opposed to cowering in terror. The original cast returns as supporting players to a new group of smarmy teen victims. The film pokes fun at horror genre tropes while referencing itself as a reaction to the “Stab” franchise, which was based on the Woodsboro murders. The tongue-in-cheek approach works to a point before becoming outright silly. Scream will satisfy bloodlust with graphic and vicious knife attacks.

In modern-day Woodsboro, popular high schooler Tara Carpenter (Jenna Ortega) gets an ominous call while home alone. She barely escapes with her life after a slice-and-dice encounter with Ghostface. Tara’s estranged sister, Sam (Melissa Barrera), and her boyfriend, Richie (Jack Quaid), return to town immediately. Sam quickly ascertains that everyone in Tara’s group of friends has some connection to the murders a quarter-century ago.

The rampage begins again. Sam and Richie reach out to a despondent Dewey Riley (David Arquette) for help. He’s initially reluctant but realizes there’s something different about the new killer. He warns ex-girlfriend Gale Weathers (Courteney Cox) and the original target, Sidney Prescott (Neve Campbell), that a new Ghostface has risen. A bombshell reveals from Sam and Tara’s past reframes the investigation. But Ghostface outwits them at every turn while racking up a body count. Sidney decides it’s time to play offense and kill Ghostface before more innocents die.

Scream relishes in mocking itself and other horror films. Ghostface is a big fan of the “Stab” franchise and uses its storylines to taunt the victims. The Gen Z supporting cast continually discusses horror classics, recent genre hits, and what went wrong with the failed “Stab” installments. The script by James Vanderbilt and Guy Busick initially gets style points for cleverness. Then milks the cow dry with the unrelenting inane banter. The teens are so-called horror experts but behave like the usual lambs to their own slaughter.

There isn’t a second of the film that’s scary. Directors Matt Bettinelli-Olpin and Tyler Gillett feint classic horror setups to trick the audience into complacency. For example, the music will rise to a crescendo and then nothing happens. The goal being to truly surprise when an actual murder strikes. The chicanery does not work. The killings are obvious except for one instance. Again the filmmakers overthink their tactics to a fault.

Scream lives up to its slasher roots. Ghostface skewers the hapless victims like a sushi chef. The murder scenes are gory as hell. Characters are sliced, stabbed, and gutted with frenzied glee. The killings are well-staged. This is not a film for anyone remotely squeamish.

The whodunit at the center of the story doesn’t require Sherlock Holmes deduction. I was able to sniff out the culprit easily in the first act. Then watched the characters bumble around for another hour and a half. That’s not a deal killer if there were scares along the way. Minor chuckles are not enough to warrant a recommendation. Scream relaunches the franchise with a new heroine. Her films need terror not attempted wit. Scream is a production of Spyglass Media Group. It will have an exclusive theatrical release on January 14th from Paramount Pictures.

From the Winter’s Bone Ozarks, we move south to the Louisiana bayous.