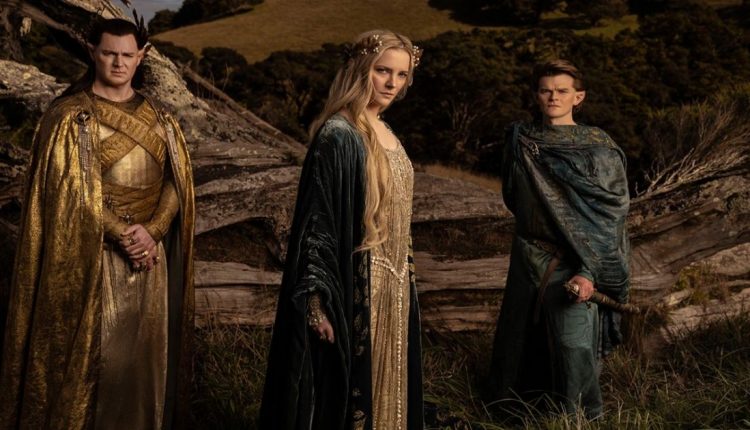 The Lord of the Rings: The Rings of Power has to serve two discerning audiences. There are the die-hard J. R. R. Tolkien fans who’ve read every page and seen the adaptations of his epic fantasy. Then you have neophytes with passing knowledge just seeking good television. Amazon’s mega-budget adventure hits a bullseye for both at mid-season. Superb visual effects, intriguing characters, solid storytelling, and blockbuster action scenes brim each episode. The show takes the time to build exposition but never stagnates or meanders. This isn’t a series with hobbits, wizards, elves, and dwarves plodding along.

Spoiler WarningSet thousands of years before The Hobbit, the premiere, “A Shadow of the Past”, introduces the young Galadriel (Morfydd Clark). She scours Middle-earth searching for orcs and signs of Sauron after the death of her brother, Finrond. She finds a symbol in the frozen Forodwaith. The High King of the Elves, Gil-galad (Benjamin Walker), calls for an end to her quest. He grants her return passage home to the Undying Lands of Valinor. Elrond (Robert Aramayo) agrees with his king. Orcs have been decimated for ages. Meanwhile, in the Southlands, elf warrior Arondir (Ismael Cruz Córdova) and his human apothecarist love interest, Bronwyn (Nazanin Boniadi), encounter sick animals and a burned village. Her son, Theo (Tyroe Muhafidin), finds a broken sword with Sauron’s mark. Also in the Southlands, diminutive harfoot Nori Brandyfoot (Markella Kavenagh) watches a star fall to earth. She’s stunned to discover a strange human in a burning crater. Galadriel jumps off the boat to Valinor and starts swimming towards Middle-earth.

Episode two, “Adrift”, has Galadriel rescued at sea by the shipwrecked Halbrand (Charlie Vickers). In the Southlands, Nori tries to help the Stranger (Daniel Weyman). Shaken and hungry, he can communicate with fireflies and possesses magical power. The Stranger seems to be seeking a constellation of stars. Arondir is captured by orcs after following a tunnel below the burned village. Bronwyn and Theo are attacked at home. She brings the orc’s head as proof that everyone must leave immediately. Elrond visits the elven-smith Celebrimbor (Charles Edwards), who wants dwarves to help construct a mighty forge. Elrond travels to the dwarf cave kingdom of Khazad-dûm to speak with an old friend. Prince Durin IV (Owain Arthur) isn’t happy to see him after twenty long years. He’s upset Elrond missed his marriage and children’s birth. The floating Galadriel and Halbrand are found by a ship.

The plot thickens dramatically with episode three, “Adar”. Galadriel and Halbrand are taken to the island kingdom of Númenor by Elendil (Lloyd Owen). Elendil and his son Isildur (Maxim Baldry), who’s training to be a sailor, are hugely important characters in events to come. Númenor’s Queen Regent Míriel (Cynthia Addai-Robinson) wants nothing to do with a troublesome elf. Elendil takes Gadriel to an ancient library. She learns the symbol is actually a map of the Southlands. She’s tossed in jail after arguing with Míriel. Halbrand is also in the slammer for fighting. Galadriel, who’d previously seen the amulet under his shirt, recognizes from the library that Halbrand is heir to the throne of the Southlands. Back in Middle-earth, the Stranger helps to push the Brandyfoot cart in the harfoot migration. Arondir, imprisoned with other elves by orcs, is forced to dig their tunnels. He attempts a valiant escape but is recaptured. The orcs take him to their leader, Adar (Joseph Mawle). Arondir’s shocked that he’s an elf.

“The Great Wave”, episode four, reveals Míriel’s dark secret. She allows Galadriel to touch a palantír. The orb foretells the destruction of Númenor. She refuses Galadriel’s request for help saving the Southlands from Sauron’s forces. Míriel orders Galadriel’s return to Middle-earth. Isildur purposely tanks a sailing test. He ends up getting dismissed with his angry friends. In the Southlands, Adar releases Arondir with a message for the humans gathered at the watchtower, Ostirith. Theo had returned to the village to gather food. He’s nearly captured by orcs, but uses his blood to grow the dark sword. Orcs call it “the hilt”, the item that Andar has been seeking. Meanwhile, in Khazad-dûm, the dwarves have agreed to help build the forge, but Elrond suspects they’re hiding something. He discovers that they’ve found a new, light and nearly indestructible ore, mithril. Arondir saves Theo and takes him back to Ostirith, where he delivers Andar’s message. In a stunning twist, the tavern owner, Waldreg (Geoff Morrell), knows Theo has the weapon. They are both burned by the mark of Sauron. Waldreg is a dark disciple with knowledge of the greater evil plan. Back in Númenor, Míriel changes her mind after a sign. She agrees to help and accompany Galadriel to the Southlands. Isildur and his friends volunteer to join the expedition. Aldar is told a boy has the weapon at the watchtower.

Related: The Lord of the Rings: The Rings of Power Premiere Review: A Spectacular Beginning to an Epic Adventure

The Rings of Power

The season’s arc comes into focus. Celebrimbor’s forge will birth the Rings of Power. Adar’s army of orcs will lay siege to Ostirith. The dark weapon has a significant purpose. Does it channel the power or hold the spirit of Sauron, a shape-shifting sorcerer? Could Andar try to become Sauron? Is Theo the dark lord’s next human vessel? That would be a bombshell twist. Isildur becomes a pivotal, tragic figure in Tolkien lore. A popular fan theory states that Halbrand becomes the King of the Dead. His ancestors sided with Morgoth, Sauron’s predecessor, in the first war for Middle-earth. My inkling is that he and Galadriel take their relationship further. That result will define his destiny. I think the Stranger is a young Gandalf. That makes sense given his looks and powers.

The Rings of Power production team and suits at Amazon Studios deserve credit for meeting sky-high expectations. I applaud the diverse casting. Racists and trolls crow loudly but are outlier haters. Having a fantasy series meant for a global audience representing everyone is a no-brainer. The near billion-dollar cost of acquiring the rights and producing season one could have been a huge failure. The glowing critical reception and astonishing ratings prove their success so far. They nailed the casting of Galadriel. Morfydd Clark is fantastic as a nascent, headstrong version of a revered character. I have been hooked. The remaining four episodes have a lot of meat on the bone to chew. Continue going big and bold, anything less would be playing it safe after a banner start to the series.

The Lord of the Rings: The Rings of Power is a production of Amazon Studios, Tolkien Estate, Tolkien Trust, HarperCollins, and New Line Cinema. New episodes premiere Friday’s on Prime Video.