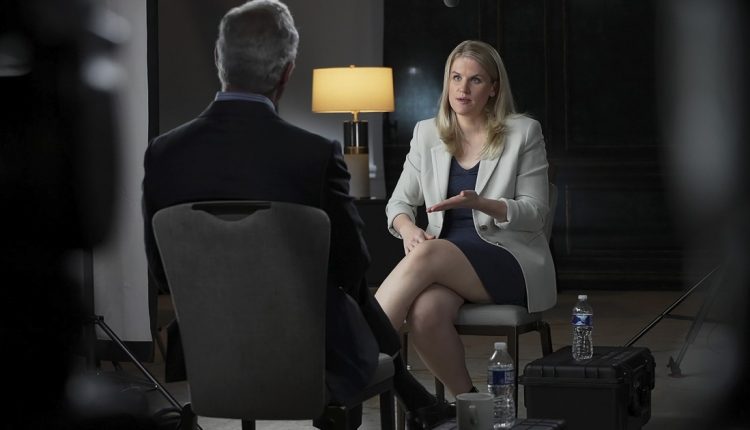 The CBS News magazine “60 Minutes” was the top-rated non-NFL prime-time program for the second consecutive week while “NCIS” finished first among entertainment programs for the third time in the three-week-old 2021-22 prime-time television season.

The new episode of “60 Minutes,” featuring an interview with former Facebook product manager Frances Haugen, was ninth among the prime-time broadcast and cable programs airing between Oct. 4 and Sunday, averaging 8.473 million viewers, according to live-plus-same-day figures released by Nielsen Tuesday.

Viewership was down 17.9% from the 10.321 million average for the previous Sunday’s edition which followed a 34-minute runover of CBS’ afternoon NFL coverage into prime time in the Eastern and Central time zones, where the bulk of the nation’s population lives.

The CW’s reboot of the 1993-95 Nickelodeon action-adventure game show, “Legends of the Hidden Temple” averaged 251,000 viewers, 237th among the week’s broadcast programs. Its overall rank was not available.

NBC’s “Sunday Night Football” topped the ratings for the third time in the television season and fourth time in the five-week-old NFL season, averaging 17.523 million viewers for the Buffalo Bills’ lightning-interrupted 38-20 victory over the Kansas City Chiefs.

The 58-minute weather delay at the start of the third quarter is considered a separate program under Nielsen rules and averaged 14.749 million viewers, third for the week.

NBC’s biggest audiences for non-NFL programs were for the Monday and Tuesday episodes of “The Voice,” which averaged 7.48 million and 7.214 million viewers, 14th and 15th for the week.

Fox’s viewership was boosted by a 38-minute runover of its afternoon NFL coverage into prime time in the Eastern and Central time zones which averaged 21.921 million viewers. The runover is not considered a separate program but was included in the weekly average.

Fox’s ratings leader was its first “Thursday Night Football” game of the 2021 season, the Rams’ 26-17 victory over the Seattle Seahawks, which averaged 14.764 million viewers, second for the week.

ABC’s biggest draw was “Dancing with the Stars,” 39th for the week, averaging 4.736 million viewers.

ESPN’s “Monday Night Football” game Oct. 4, with the Chargers’ 28-14 victory over the Las Vegas Raiders averaging 12.322 million viewers, was at the top of the cable rankings and finished sixth overall.

The top 20 cable programs consisted of “Monday Night Football” and its 15- and 32-minute pregame shows, the second necessitated by a lightning delay to the Chargers-Raiders game; “Thursday Night Football” on NFL Network; the American League wild-card game on ESPN; the National League wild-card game and two National League Division Series games between the Dodgers and San Francisco Giants on TBS; two American League Division Series games between the Boston Red Sox and Tampa Bay Rays on Fox Sports 1; and 10 Fox News Channel political talk shows — five broadcasts of “Tucker Carlson Tonight,” four of “Hannity” and one of “The Ingraham Angle.”

“Clickbait” edged “Lucifer” to top Nielsen’s top 10 list of streamed programs for the second consecutive week. Viewers spent 1.108 billon minutes from Sept. 6-12 watching the eight-episode miniseries about the abduction of a man (Adrian Grenier) in a crime with a sinister online twist.