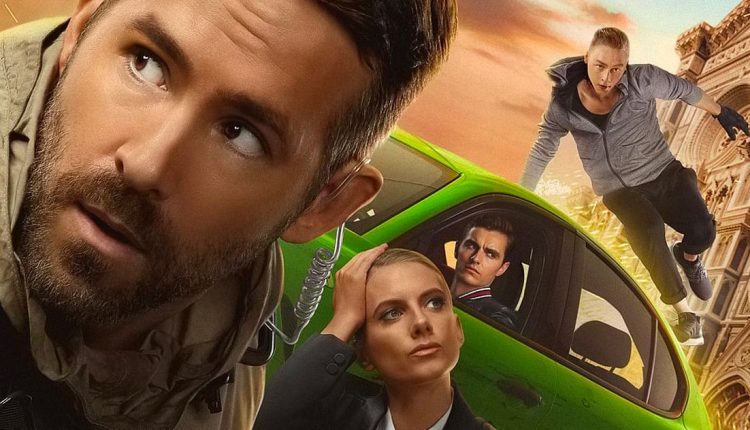 Michael Bay has brought his specific brand of action spectacle to streaming for the first time. His latest movie, 6 Underground, was produced by Netflix and sees the filmmaker going back to original Bayhem after his most recent, and likely final stint in the Transformers franchise. Ben Hardy is just one of the people along for the ride for Bay’s latest.

Ben Hardy has quite the ride over the past few years after appearing in the acclaimed TV series The Woman in White and the real-life drama Only the Brave. But it was his turn as Roger Taylor in the Queen biopic Bohemian Rhapsody that put him on an entirely different level. Now, he’s starring alongside Ryan Reynolds in a massive-budget spectacle.

6 Underground centers on a tech billionaire who, after faking his death, recruits a team of international operatives for a bold and bloody mission to take down a brutal dictator. The cast also includes Melanie Laurent, Dave Franco, Corey Hawkins, Adria Arjona and Manuel Garcia-Rulfo. I recently had the chance to speak with Ben Hardy about the movie, as well as his crazy past couple of years and a possible Bohemian Rhapsody sequel.

Ben Hardy: That’s a good question. What can I compare it to you? I’m trying to give another movie to compare it to. I suppose maybe Deadpool meets Michael Bay. It’s from the writers of {Deadpool] [Rhett Reese and Paul Wernick], so it’s definitely similar tonally. The film is like Michael Bay on steroids. It feels like he’s been given carte blanche. And he’s just going crazy, which was great. It was fun to be a part of. I think I think that’s the best way of comparing it.

It looks very much like classic Michael Bay, but in the biggest possible way. So for you working on that, what was it like working on like a massive Michael Bay spectacle? What’s that like from the inside?

Ben Hardy: I Actually, I actually found it really, really interesting. What I find most interesting is his sets a quite chaotic, and there’s potential for that to be a negative thing. I worked on chaotic sets where it was negative. But he’s completely weren’t, and it was because his movies are so… every frame is so high stakes and it’s so dramatic. It felt like that chaos, that kind of frenetic energy informed the scene in some kind of way, and it was just always there, and is always present, and it was exhausting. But it was exhilarating at the same time. Yeah, he’s great. He’s great to work with. He’s like a kid, really. He’s just a kid who’s making action movies that he really wants to make. But he’s doing it well. So he’s been given some amazing equipment. Or bought some amazing equipment himself.

So I’ve always sort of viewed Michael Bay movies specifically as a big screen experience, but this was made for Netflix, obviously. So were you guys cognizant about that when you were making it? Trying to make this play on what most people probably watch it on like a TV? Or was Michael still just doing his thing, as per usual?

Ben Hardy: Right? I mean, the film does have a theatrical release. So I think if I as an audience member, I’d probably go watch in the cinema, and then watch it on Netflix maybe as well. But no. There was no consideration for that as far as I know. II think it was Michael. He’s doing his thing. I think it will translate either way. But it is very cinematic. It’s definitely an epic movie, but I mean, people’s TV’s seem to be 40 inches, most people’s these days anyway. I think it’s definitely one for the big screen, if you got the time.

These past few years for you specifically have been kind of, maybe I’d use the word meteoric? You’ve had quite a nice run here. What’s that been like for you as an actor, going on this crazy ride with these huge movies and this success?

Ben Hardy: I’ve really just tried to appreciate it. Like, to get to go to the Oscars, something I never really thought would have happened and get to celebrate the success of that film, Bohemian Rhapsody. I was thankful to be there. I just I suppose it’s important to not always keep thinking about moving forward, but to be able to be present in what you’ve already achieved and appreciate that. I still am very, very thankful, very happy and proud of what I’ve been able to do the past the past few years. I suppose just that I’ve been trying to focus on taking stock of that and actually appreciate it, appreciating it rather than trying to think, what’s next? Which is very easy for all of us to do, no matter what your job is.

You did mention Bohemian Rhapsody, though. And I do have to ask, they haven’t necessarily ruled out some sort of follow up. Is there any scenario by which you would see yourself reprising your role if the opportunity ever came up? Whatever that would look like.

6 Underground is streaming now on Netflix.