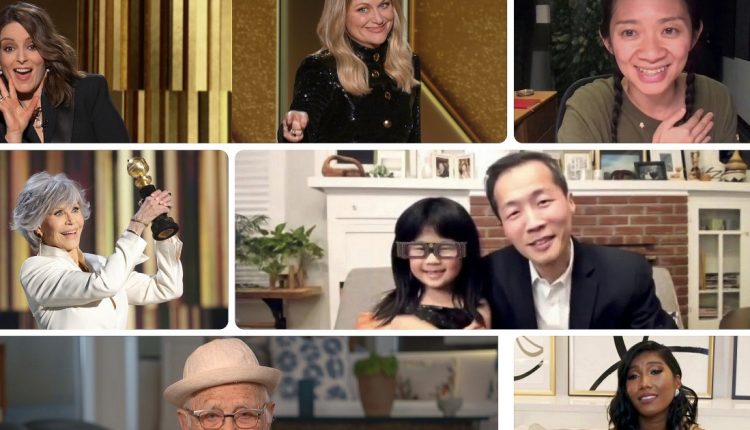 The 2021 Golden Globes have come and gone, and like many other virtual awards ceremonies, there were winners, there were jokes and there were awkward technical glitches.

The 78th edition of the awards bestowed by the Hollywood Foreign Press Assn., arrived in the wake of a Times investigation that drew attention to some of the organization’s questionable practices. A number of presenters and winners addressed the revelation that has drawn the most criticism — that there are no Black members in the 87-member group.

But other things happened too. Below are six must-see moments from Sunday’s telecast.

Fey and Poehler brought their BFF energy to the Golden Globes once again, teaming up to cohost the ceremony from opposite coasts. Their quippy, split-screen opening exchange was nearly seamless, and one of the few moments of the show that didn’t feel as socially distant as it actually was.

Among the topics the pair hit in their opening monologue was the virtual show, their “smoking-hot” first responders and essential workers that comprised the audience, and the confusing distinction between television and film in a year where movie theaters were mostly closed.

Fey and Poehler also touched on the HFPA’s recent controversy about its lack of Black members.

“We all know that awards shows are stupid,” said Fey. “The point is, even with stupid things, inclusivity is important.”

Fonda was on fire as she accepted the Cecil B. DeMille Award, ignoring her own career and instead asking Hollywood to be a leader when it comes to diversity and inclusivity in film and TV.

After listing the many shows and films that had touched her during the past year, she noted, “[T]here’s a story we’ve been afraid to see and hear about ourselves in this industry. A story about which voices we respect and elevate — and which we tune out. A story about who’s offered a seat at the table and who is kept out of the rooms where decisions are made.”

Fonda asked that everyone, including those who decide who gets jobs and who gets awards, “make an effort to expand the tent.”

Boseman, who died in August at 43, won the Golden Globe for actor in a drama picture for his role in “Ma Rainey’s Black Bottom.”

Taylor Simone Ledward, who accepted the award on Boseman’s behalf, delivered an emotional tribute to her late husband.

“He would say something beautiful,” said Ledward. “Something inspiring, something that would amplify that little voice inside of all of us that tells us you can, that tells you to keep going, that calls you back to what you are meant to be doing at this moment in history … I don’t have his words, but we have to take all the moments to celebrate those we love.”

An earlier segment involving TikTok star La’Ron Hines quizzing young children about various Golden Globes nominees helped show the reach and significance of Boseman’s legacy. The only person every child was able to identify was Boseman, whom they knew as the superhero Black Panther.

Sitting alone on camera in casual attire, she hoisted a green mug after the director win and proceeded to give credit to “the whole ‘Nomadland’ team.”

When the film won for best drama, there was no mug, just a stunned look. Then her smile seemed to go twice as wide as it had the first time around.

“Oh, my God. Wow. … I am speechless,” she said before thanking Jessica Bruder, the author of the book her movie was based on, and Frances McDormand, the actress who starred in it.

“‘Nomadland’ at its core for me is a pilgrimage through grief and healing, so for everyone who has gone through this difficult and beautiful journey at some point in their lives, this is for you. We don’t say goodbye. We say, ‘See you down the road.’”

As he accepted the Carol Burnett Award for outstanding contributions to TV, Lear took a moment to shine the spotlight back on the award’s namesake.

“I am convinced that laughter adds time to one’s life,” the 98-year-old TV pioneer said, “and nobody has made me laugh harder, nobody I owe more time to than Carol Burnett and the brilliant team that helped her realize her comedic genius.”

At the end of his speech, he thanked her a second time, tugging at his earlobe as she did at the end of “The Carol Burnett Show.”

“At close to 99,” Lear said, “I can tell you I’ve never lived alone. I’ve never laughed alone. And that has as much to do with my being here today as anything else I know.”